January 04, 2011
40 Minutes of near-perfection. That's what your Milwaukee Panthers gave the fans at the U.S. Cellular Arena last night. 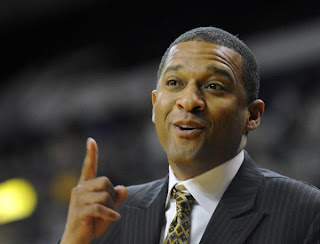 Rob Jeter, like a lot of us fans, is probably cautiously optimistic that things are improving


Butler (10-5, 2-1) came into this game having already lost 4 games. But only one of those losses could be considered a bad loss- Evansville who beat BU by 2 in Hinkle. Xavier, Duke and Louisville are hardly terrible games to lose. With our 7-8 record coming into the game, Vegas had the Bulldogs as 10 point favorites and no one other than a handful of blind optimists had any sort of good feeling about us competing in this one.

The best part of the game last night is that for the first time in forever (if not the first time ever!), we didn't just beat Butler- we demoralized Butler- from start to finish. Butler wasn't even as close as 5 points just minutes into the game, and we kept- piling- on. We limited ourselves to just 12 turnovers (we average 14) and the bane of our 7-8 start (field goal shooting %) became the rocket booster that propelled us to this lopsided victory. 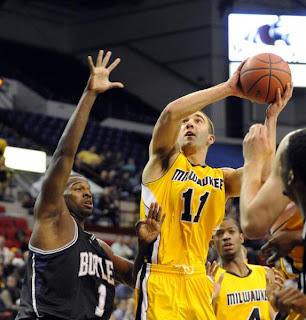 Seniors Tone Boyle and Anthony HIll will be key to any kind of sustained turnaround effort
Our offensive performance was flat-out stellar (55.3% FG, 43.8% 3pt- and I thought our shooting at SDSU could not be reproduced!). But for as good as we shot the rock, our defense is what made this the spectacle it became. We were on Butler like white on rice and didn't let up.

We didn't make stupid fouls and we contested nearly every single Butler shot. It was an abrupt and welcomed departure from some of the laissez-faire defensive efforts we have seen this season. Not many teams will even get close to us if we can duplicate that intensity on D in our remaining games. 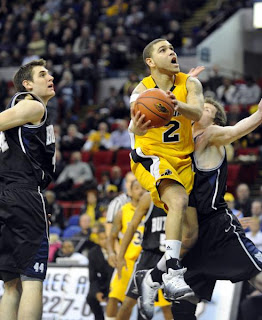 Kaylon may be starting to get comfortable in his new Horizon environs
Butler was literally out of the game just a few minutes into the second half. It was like some kind of Bizzaro version of our blowout losses (where we are the ones on the destroying end!).

We had gotten used to being on the receiving end of these lopsided games- and it was a thing of beauty to see us pop off that bottled up frustration and become the ones punishing and not receiving punishment (especially when the opponent was the team that didn't lose a single conference game last season).

Butler's Matt Howard got pushed around in the post and the officiating crew had obviously seen more than their share of his flops in the past. They weren't biting- and so, Ant began barking. It was one of the most dominating games I have ever seen Anthony play. 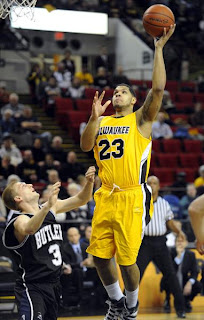 Ant put in one of his best offensive performances in a Milwaukee uniform last Saturday night
After causing quite a scare in the 4,000+ boisterous (mostly Panther) fans when he went down with what appeared to be a serious ankle injury, Ant got taped up on the sidelines, and returned to wild cheers. When he got the rock again- he didn't miss a beat. Butler had no answer for our postmaster... and boy did that feel good to witness.

The biggest story of the night though was Junior transfer and Panther point man Kaylon Williams. KW recorded the first UWM triple-double since Marc Mitchell (who was reportedly in attendance with son and Rufus King HS sophomore guard Austin Malone-Mitchell) achieved the feat way back in 1993. Williams (10pts, 10rbs, 10ast) has not played bad at all this season, but I think a lot of Panther fans were hoping he would be more than "just" a facilitator and a 5 points/4 assist/4 rebounds kind of guy. The good news is- he is more than that, and then some. 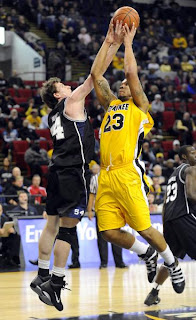 Matt Howard had his hands. knees, legs and arms full  going up against Ant

With the games he had in Detroit and last night- KW certainly seems poised to become a play-maker in his first season as a Panther. Can't wait to see what more he has up his sleeve.

Tone Boyle (15pts, 9rbs, 4-7 from 3pt) and Tony Meier (20pts, 4-7 from 3pt) contributed greatly. With those two, Ja'Rob and Lonnie we have one of the more formidable perimeter teams in the Horizon. Kaylon's recent foray into three point success (watch the final highlight in the video below- you will be floored by the ease with which KW drains a 3 over Matt Howard) is just the cherry on the sundae.

But can we keep it up?

Our three point shooting has been excellent the past two games. Perhaps Kaylon Williams post-game comments about the fact that the great shooters on this team have been hitting shots all season (even if not in some painful losses we've had) is hinting at the fact that this isn't just a fluke.

We have some real offensive firepower on this team- and maybe with last night's confidence injection, the cat's (-er.. the Panther's!) out of the bag.

Our guys can shoot well, and maybe they aren't likely to ever go back to laying bricks from long distance (and overall) from here on out. I'm sure we'll have our games where we won't shoot this well.... But if we can simply shoot over 40% overall and at least 33% from 3pt from now until it's over, very good things could happen for your Milwaukee Panthers. 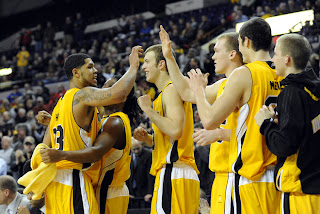 This is about the happiest the team (and fans) has been yet this season.. 'Mo is a helluva thing.
Milwaukee (8-8, 3-2) now has the opportunity to really make a big early season conference push. None of these upcoming games will be easy. But the game in Green Bay this Saturday night, and the following home stand against UIC and Loyola  look  a lot more winnable after our second half in Detroit and the immaculate beat-down we gave Butler last night.

The roller-coaster continues. But at least we are still hanging on. The odds are still stacked against us, but a few more (or hopefully several) wins in a row could have even the Panther non-faithful questioning not Rob Jeter and his staff's leadership and coaching abilities but rather their own short-sighted accusations of people like me being "Pollyanna"-ish in believing that this team is a whole lot better than their record would indicate.

Very well-cut highlight film from the game, courtesy of the Milwaukee AD (uwmpantehrs.com)
I am not saying we are world-beaters and on our way back to the Big Dance- I am just saying that we do have a very talented team and they deserve our support. If you are a true Panther fan, your fanhood would never even be in question- not by me, not by yourself. If you can't stomach the rough and tumble of being a Mid-Major, you might find a more comfortable situation following Wisconsin or Marquette here in state or Duke or Michigan State from afar.

Yes, this was only one game.. But you cannot say that dominant performance by our Panthers wasn't impressive as all get out relative to our lack of any similar blowouts vs. very good teams in recent years. Maybe us "silver-lining hunters" aren't really that naive at all. Maybe, earlier in the season (even in some of the blowouts) we just saw flashes of the beautiful thunderstorm that bolted down and soaked Butler in the Cell last night. We aren't crazy. We are Klotsche Crazy.