January 31, 2011
Your Milwaukee Panthers seem to be playing a little differently lately. Beginning with our unexpected OT victory at Hinkle, this team has finally learned how to battle adversity and find a way to win.

We were down early to Butler, down early to Detroit and down early to WSU- but battled back in all 3 to come out with the W. This is a very positive development that has not gone unnoticed by the Milwaukee fan base. 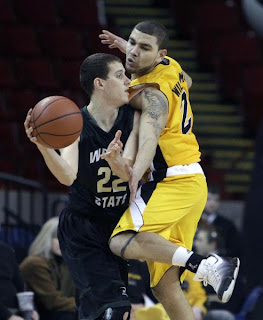 Kaylon, defending the Raiders' Cole Darling
Milwaukee (12-11, 7-5) traded barbs much of the game vs. Detroit (11-12, 5-6) this past Saturday night. Detroit's Chase Simon, Eli Holman and Chris Blake all scored in the double digits.. but it was Ray McCallum Jr. who seemed to show the most energy and poise of all Titans on the court.
In what became Detroit's first possession, Ray Jr. took advantage of a Panther turnover and stormed straight to the hoop, thundering in an emphatic two handed jam. It was in this early few seconds that I began to question whether we were ready for the DMU onslaught. Thankfully, we did not shy away from this challenge- in fact we met it head on and were determined to get the W.
We overcame a 13 point first half deficit to draw within 1 at the break. And then a very slow start to the second half saw Milwaukee down 10 with just 9:24 left in the game. We kept chipping away though and made the shots we needed to make to win the game, 72-67. 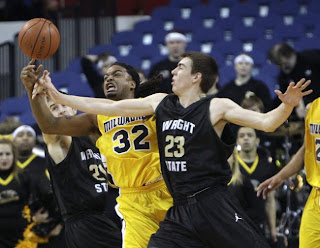 Lonnie aggressively goes for the ball amidst two Raiders
Tone Boyle led all scorers with 16 (and he collected 4 steals to boot!). Tony Meier scored 12 and Ant put up 13 to go along with 8 big rebounds.


Ryan Allen was once again his effective self coming off the bench- 10 points, 3 assists and a pair of crucial blocks (each of them helped turn the tide of the game our way). And in his most impressive showing to date- freshman Kyle Kelm filled admirably in for Tony/Ant when we needed him. Kelm's 9 points and 5 rebounds (3 offensive) were also a big factor in this comeback win.
Other than some very questionable calls by the refs against us and against Detroit (at one point Eli Holman threw a hard forearm into Ryan Allen's face, and Allen (who did not initiate any contact) received the foul), this was a very satisfying win to watch. 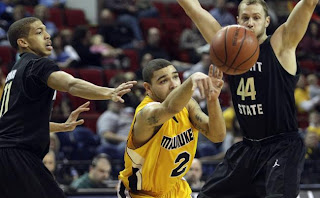 Kaylon attempts to thread the needle for another assist
With this one in the books, the Panthers secured regular season sweeps over both Butler and Detroit. Who would have thought that would only be good enough for 5th place in the League?!! I don't think anyone foresaw just how good Valparaiso and Cleveland State turned out to be (so far at least- either of CSU or VU can yet stumble in the final stretch).
Next up was Wright State (14-9, 7-4)- another team looking down at us in the Horizon League standings. No one can forget the embarrassing 68-44 defeat they handed us at their place... But on this Sunday it was different.

Not only were they without two of their key players in Troy Tabler and Cooper Land (who, combined for 35 of WSU's 68 points in that victory....), but your Milwaukee Panthers were starting to get a feel for this consistency thing.

While it can be said we certainly did not play our best offensive game in this victory (34.9% FG, 18.2% 3pt for just 54 points!), our Big D made up for it. We did limit ourselves to just 10 turnovers.. but so did WSU. And Vaughn Duggins nearly willed the Raiders to victory all by his darn hot-handed self. On the whole, we also allowed the Raiders to shoot better than us across the board. 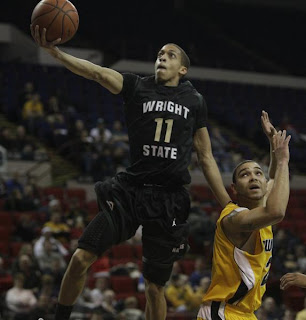 N'Gai Evans cashes in on a fast-break
The difference came down to rebounds- we out-rebounded Wright State 33-22 (15-5 on the offensive glass). Those rebounds for "stops" on D and those second chance generating offensive rebounds proved to be the key. We barely (and I mean barely (Wright State nailed an otherwise impressive buzzer beating 3.. but Milwaukee was up by 4..)) edged the Raiders 54-53 in the lowest scoring Panther win that I can remember...
As they say in cliche: "defense wins championships". But defense cannot do it alone..
It was announced earlier today that the Panthers will be playing at Buffalo for the annual Bracketbuster match-up. So now the '10-'11 schedule is finally complete. We have seven games left to prove that this is not a lost season.
I don't believe there is one team among those seven that we cannot beat. Valpo and Cleveland State obviously will be the statistically toughest challenges (at least we have Valpo at home this time..). But every game will be a challenge- we cannot take a single minute for granted. 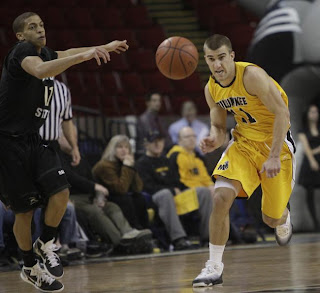 Tone charges up court while Panther fans bite their nails in hopes we can pull it off
And so it's on to the final game of this 3-game Homestand here in Milwaukee. We host the Green Bay Phoenix this coming Saturday at 2pm down at the Cell. It's pay-back time for the 69-64 loss they served us up at the Resch Center early last month.

With the way this team has been playing as of late (read- consistent, or at least "tough-nosed" and able to find a way to win the close ones), you'd be wise to witness what could be the start of our traditional odds-defying season-ending push.

We all wish it didn't have to be this way- but if we can make it- will you take it?

It will be one tough slog, that's for sure. But if we can keep winning, these optimistic but quiet rumblings you may have heard lately might turn into some kind of fierce roar by the end of the regular season. Let's sit back and see how it all goes down...