Panthers Pour it on the Flames

January 14, 2011
Your Milwaukee Panthers dominated for all but about 5 minutes of last night's blowout victory over the UIC Flames at the Cell downtown. 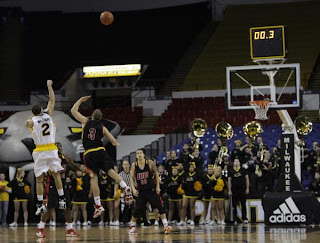 Kaylon's near half-court shot races to beat the .03, .02, .01.....  Money!!!!
We operated our inside-outside offensive MO to perfection and kept UIC (5-13, 0-6) scrambling on D. On more possessions than I could count, a Flame would get picked or overstep a Panther's moves off the dribble and find themselves out of position and a Panther launching a wide-open 3 bomb or Ant getting clearance to put one in or get a free trip to the line by a last-ditch UIC defender's hack or over-the-back.

While we played an excellent first half, Kaylon Williams buzzer-beating three to finish out the first half was the moment this team kicked it into high gear. The Panther team that came out after half resembled what a Panther in the wild must look like after going weeks without a meal. It was clearly evident- we were HUNGRY for this victory.

It wasn't even close so it's hard to give my usual hack-ish attempt at a meaningful/interesting breakdown of how this was a see-saw battle (it wasn't) or any drama that we encountered (we didn't). UIC did make a nice run in the late second half after Jeter had emptied the bench and let off the gas a bit (we were up by as many as 23 not too long after the break). But this one was well in hand from the early goings.

UIC did put four players in double-digits (led by Robo Kreps who posted 19 on 6-10 from the field including three 3's), but their overall defensive front was more like a sieve that allowed Panther shots to pour right through and up onto the scoreboard. At the end of the night the scoreboard read the kind of words and numbers we like to see: Milwaukee: 87, UIC: 75. 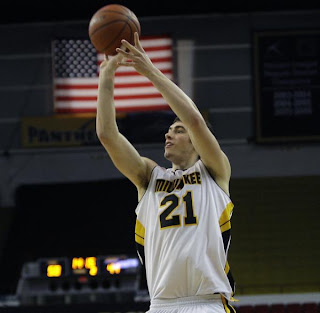 This is quite the patriotic shot of Tony. GO UWM!!!! GO USA!!!!
It was a great game to watch, to put it mildly. Very reminiscent of the Butler celebration last week. It is entirely possible that we can duplicate that in our 5 (or more depending on H-League Tourney seeding) remaining games at the Cell.

Now for the Milwaukee (9-9, 4-3) player accolades (this game IS ALL ABOUT team, but I gotta do it- it's tradition, and players deserve an online shout-out when they put in the kind of stat-stuffing performances that help us win games).

Tony Meier continues to get comfortable in his role of team co-leader (along with seniors Ant and Tone and Junior transfer, Kaylon Williams).

The Mega-Man was everywhere last night. His 22 points on 7-12 from the field (4-6 from 3pt), 4-4 from the charity stripe, 5 rebounds, 3 assists and impressive block were a big part of the reason the Flames and their fans were very dispirited throughout nearly all of the game last night. 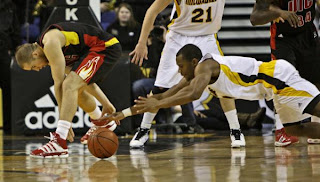 Allen diving for the ball
Anthony Hill almost had us put two players in the 20pt scoring zone! Ant (18pts, 6rbs and 8-10 from the FT line) managed to be our driving force in the post (the "Inside" of our Inside/Outside offense) despite being hampered by foul trouble all night and fouling out with more than enough time to have gotten 2 more points!

Tone Boyle (17pts, 3rbs, 3ast) and Kaylon Williams (14pts, 4rbs, 7ast) held down the back-court very effectively. Lonnie was hampered by a recent ankle injury (doesn't appear to be serious though) and only played 4 minutes. Ja'Rob helped boost our attack with 6 points (both 3's, J-Mac was 2-2 on the night), and Ryan Allen provided the biggest jolt of excitement to the Cell I have seen in years.

Allen took a perfectly-timed alley-oop from Tone Boyle and thundered home a left-handed one-hand jam to the thunderous applause of Panther fans in the stands and the Milwaukee bench. 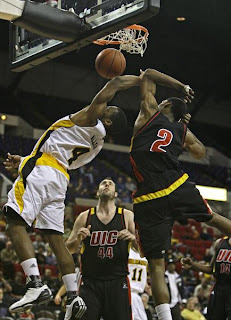 Ryan Allen with an ESPN Top 10-worthy dunk. Oh, the woes of being a "Mid-Major"...
This was another celebration of our incredible talents at the Cell. Will we see another one on Saturday?

A very knowledgeable poster and long-time Panther fan on the very well-designed and administered Milwaukee Panthers Discussion Board (which I regularly frequent for news, fan sentiment and updates) who goes by the handle "ghostofdylan", brought up a very mind-boggling and telling stat today:

Team Extreme indeed! The high-scoring contests are very entertaining- and we almost always win those.... but 50 points in our 9 losses... How? I think it has to do with the fact that we only recently stopped letting opponents' big early runs get under our skin so much. Those numbers will likely change and that gap will narrow as we continue to get more consistent and the season races to the finish line.

We can be concerned that our defense gave up a lot of points last night (many which came in the final 10 minutes when we let off the gas and took many of our starters out), but we cannot deny that the team we saw last night was the same team we saw throttle Niagara, claw back in the second half @ Detroit, and totally embarrass Butler here in Milwaukee last Monday. 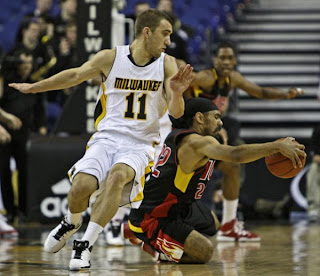 Tone lit it up and the Panthers kept the fire alive all night against the Flames..
It is encouraging to see that the Incredible Pounce is showing up with a more regular frequency these days. Let's hope he shows up this Saturday at the Cell at 1pm for the game vs. Loyola (10-8, 1-6). Loyola's league record doesn't do justice to a team that lost by just 8 and 2 points against #5 Kansas State and Butler, respectively.

In the Horizon League Tourney, it doesn't matter if we can beat Butler in the second or third round if we come out the following game and lay a big white round one.

The only thing that will fix our fractured fan base that admirably (if not always whole-heartedly) continues to follow this program is a big-time winning streak or streaks before the end. Pile up wins, give 'em hope that we can go deep into the H-League Tourney and the fans will pile into the seats again. 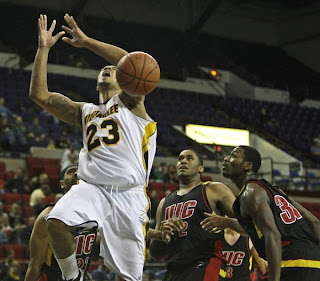 Ant had another big night- could have been even bigger if didn't foul out
It's as simple as that, all other talk is just roundabouting the real issue- wins and losses.

This '10-'11 Milwaukee Panther hooper squad most definitely has the stuff in 'em. That is no longer a question at this point.

The question that lingers and bites at the unflinching optimism of folks like me and inflames the rhetoric of other folks who claim that this season, and the entire Jeter era has been a "lost cause" or at best a "case study in mediocrity", is:

Can we end the recurring theme of being "consistently inconsistent" and stop "The Unstoppable and Incredible Pounce" from continuously turning back into the Mild-Mannered 'Bruce Panther' ever few game days?

Your tremendously-appreciated support certainly won't hurt our chances of making that happen and keeping the "Incredible" Panthers here to stay.