February 23, 2011
Ok, so this game isn't quite the end-all, be-all of games this season. We could very well win this and lose in Youngstown this weekend. Or we could win both and lose in the first Horizon playoff game (Semifinals). 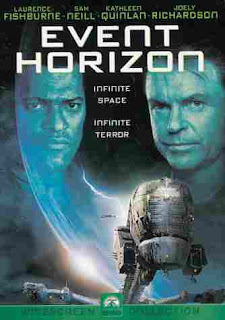 The team embarks on their two final regular season contests- will we do the dang?
But the fact remains (thanks to our sweep of Butler), win the big one tomorrow night and the bigger one Saturday, and Milwaukee will win the Horizon League Regular Season Title and earn a #1 seed, a double-bye straight to the Semifinals and the right to host the 2011 Horizon League Tournament.

Oh and the Bracketbuster game at Buffalo? We got beat soundly by the Bulls, 80-65. BU's leading scorer Zach Filzen had a career night, Ant played great before going down with an ankle sprain.. blah, blah. It meant nothing to our season hopes however.

The outcome of that game has absolutely zero bearing on our conference fortunes. Had we not laid some (5) duds earlier in the season a win over Buffalo on the road might have been considered by the NCAA and NIT selection committee, but not when we are 16-11 (now 16-12 (11-5)).

Yes, the continued "winning" momentum would have been nice, but we are still in the midst of a 7 game conference winning streak- so really, the momentum is all still right here...

ESPN's Bracketbuster Weekend has largely lost it's meaning over the years. It was started in 2003 and featured 18 premier "Mid-Major" teams. The event has ballooned to include hundreds of teams- most of which have zero chance of making it to the NCAA's let alone upsetting a highly ranked Major team.

It has also become a an unfortunate schedule roadblock for many teams. While it was meant to give smaller programs good televised match-ups to bolster their NCAA Tournament resume, it now simply takes scheduling control away from coaches. 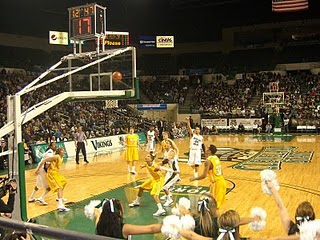 Briefly (ya, you know I'm great at that) here are the scenarios that could unfold for Milwaukee:

1). Win at Cleveland State, lose at Youngstown and the #1 and #2 seeds would be out of reach due to amount of games left for Valpo and the tiebreaker rules. #3 or #4 seed would be attainable and give us a 1st Round home game.

2). Lose both games in this final road trip and we will likely get the #4 seed at best, due to tiebreakers. Unless Butler, CSU and VU all lost their remaining contests- there is a scenario whereby we could still get the #3 seed. In either case (#3 or #4), we would get a 1st Round home game at the Cell. 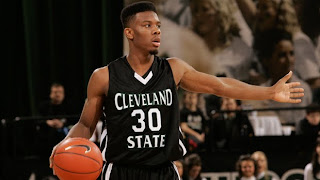 To have any chance at winning this game- we must not let Norris Cole have a big game.
3). Win at Cleveland State and finish the season like a game of Mortal Kombat by taking out the Penguins in Youngstown and we would wind up the conference season 13-5 (acceptable improvement over last year's 10-8?).

If we can somehow follow option #3, we would lock up the #1 seed and the conference regular season title by virtue of tie-breakers (our Butler sweep is huge for us) and the 2011 Horizon League Tourney 2nd Rd, Semifinal game, and potentially the championship game- would be played right here in good ol' Milwaukee, Wisconsin.

First it's Cleveland State. If we can pull a win out of there, we should be able to carry the Mojo over into Youngstown- but playing the Penguins these days is no longer a gimme (Butler lost in Youngstown earlier this year). 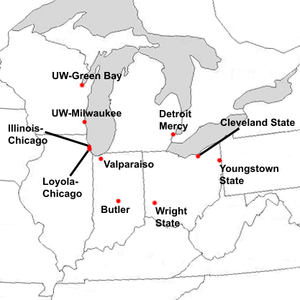 The geography of the Horizon League... where will the bulk of the Tourney be hosted? MKE?
According to varying sources, recently injured Panthers Anthony Hill (ankle), Ryan Allen (back) and Kaylon Williams (shoulder) are all expected to play tomorrow night. That is a pretty big relief considering we seem to play at half strength if any one of those guys aren't out there.

We have to play disciplined, with an intense focus on how to limit their weapons (Norris Cole, Aaron Pougue, Jeremy Montgomery) by playing stellar super glue defense and playing "our game" that has proven to work night in and night out when we play it (inside-outside, 3's and lay-ins/free throws) to a "T". 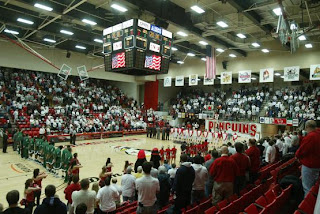 If we beat CSU @ CSU- don't think ahead to the HLT- we'll have to win here as well..
Let's sink those treys, get Ant operating in the post like a scoring machine over and around Aaron Pougue, and most importantly- let's guard the Vikings biggest offensive weapons- namely Norris Cole, Trevon Harmon and Jeremy Montgomery. We cannot let those guys get open looks all night. The Panthers must lock it down and throw away the key.

I'm excited for what could be (not just another pair of Panther victories but) the drying cement of the rebuilding portion of  Milwaukee's "Jeter Era". If we win and win again on Saturday, so many people's doubts and fears and reluctance to to support this program could simply evaporate in an instant. If we win.

Nothing is guaranteed in this season's rough and tumble Horizon League. There is a chance we could lose tomorrow night (perish the thought) and should that happen, all is not necessarily lost. But winning (and sweeping) this final road swing gives Milwaukee the key directly into the Semifinals- a key we have not held in  a very, very long time.

Winning both tomorrow night and this coming Saturday would literally make the challenge of winning the Horizon League Tourney and capturing the ever-coveted NCAA Tourney Auto-bid 200% easier for us.

We have already become "Incredible" in the eyes of many- even the eyes of many who doubted this team could ever rebound from such a slow start. But the "'10-'11 Season 180" is not yet complete. Respect has been earned and respect has finally been given to this resilient Panther team. Can they parlay that respect and their amazing conference momentum into a #1 seed?

Raise Your Sights Milwaukee. Our opportunity has arrived.
We will be watching with hope in our hearts but vengeance on our minds (remember CSU's clinic at the Cell this season?). They may just have to re-learn that age-old lesson: Payback is a B****.