February 08, 2011
While much of the weekend had sports fans across the nation (and esp. in Wisconsin) preoccupied with the (now) Super Bowl Champion Green Bay Packers, another team in the eastern part of Wisconsin was making good on keeping steady it's hopes for a season-turnaround. 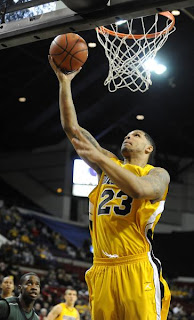 Ant-ONE!! Hill had a masterpiece of a game... ESPN even took notice.
Yes, the Panthers have a small drop-in-the-bucket amount of buzz relative to what the Pack has... but at least in local circles... people are starting to notice that this team is not going to fold after the confounding 9-11 start.
Your Milwaukee Panthers (now 13-11 (8-5)) seem to have finally figured out the consistency thing that had them playing like contenders one game and a young inexperienced team the next (we've got st8baller upper-classmen veterans).
After dispatching Butler, Detroit and Wright State back-to-back-to-back, our arch rival from upstate in Green Bay (UWGB) was next. This one was not going to be a cake-walk- we lost to UWGB 69-64 at the Resch Center earlier this year. 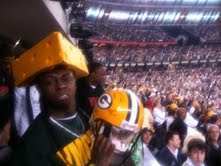 A true cheesehead. Wayne made a late-breaking remix of Wiz' "Black & Yellow" for the Pack.
With their formidable, proven and battle-tested senior guard tandem of Rahmon Fletcher and Bryquis Perine leading the way and a streaky and spindly freshman 7-footer in Alec Brown to contend with.. we knew this would be a good ol' Wisconsin-style brawl.


But as it turned out- we fought much harder from the opening tip to the final buzzer (UWM was up by 18 at one point in the second half).
The Panthers did not disappoint in putting on the best Packer Super Bowl pre-game event (a pre-game "game"- and a win!) that Packer-Panther fans could dream of... (sorry for Panther fans who don't like the Pack, but you cannot deny their unprecedented drive to take the Super Bowl Crown as a frickin' 6 seed! (we barely made the playoffs!)). 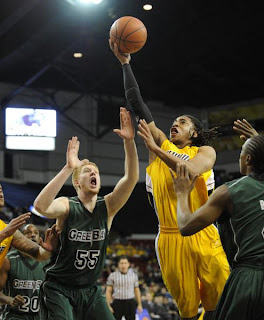 Ja'Rob for the bucket...! McCallum has def. been showing his experience this season.

The atmosphere was tremendous (funny what ESPNU will do for our student turnout!) and Milwaukee looked like they were playing in a Super Bowl (or at least playoff game). We took the opening tip, set our sights on the hoop and did not look back.
We began by focusing on opening up perimeter shots. When those failed to go in we did not let it get to our confidence. Instead, we went straight to our ultra-reliable postman, Anthony Hill (29pts, 15rbs, 3ast- and 7-8 form the field).

Ant did serious work down in the post until we got our perimeter shooting back in the second half (11-24 for 46% after a terrible start from outside..).
Anthony Hill just had his best game as a collegian so far. No doubt about it. And whats more impressive is he only played 27 minutes (Ant sat with 3 fouls for much of the second half (just imagine...)). I think his best games are coming up real quick here in the next month (or more?) of action.. 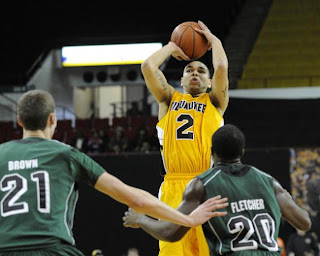 Kaylon locks, loads and fires..... - hey, was this the 3 to close the first half?!!
Fletcher (16pts, 5rbs) and Perine (22pts) impressed me a lot. Perine seemed able to score through the lane at will... something our team has struggled with at times (but Ja'Rob, Ryan Allen and K-dub have been doing a lot to change that). Alec Brown was effectively neutralized by Ant and couldn't buy a bucket (7pts) or a board (4rbs) throughout most of the contest.
Ja'Rob, Kaylon and Tone also all scored in double figures (and Kaylon dished out 7 assists to increase his APG average which at 4.9 is still within striking distance of potential Horizon League POY Norris Cole who is averaging 5.3 APG...).
All around it was just a great game from this team. When we were missing the threes, we were missing bad! (something like 1-11 to start it out). But we were able to rely on Ant for easy 3-4 footers and many, many successful trips to the line.
And after Kaylon closed out the first half with a 27 foot buzzer beater... well, that's when the lid came off the can of whoop a$$. Milwaukee trounced Green Bay in the end, 88-75, and moved into a tie for 4th place (w/Butler) in the Horizon League.
I know myself and many others are very impressed with the way this team has started to turn things around. But(!), we mustn't get ahead of ourselves... A four game winning streak does not a season or a champion make. 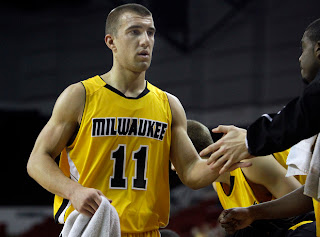 Tone's perimeter shooting is heating up at just the right time....
We have six remaining regular season contests (five conference)- and while you'd be uninformed to not know that we can win every single one, games are not won and lost on blogs or discussion board opinion volleying..

You (or rather our newly confident Panther battalion) have to play the game with the expectation to win. And, when the going gets rough (like it did vs. Detroit and Wright State)- you cannot stray from that expectation and that certainty that you are better and will win the game if you follow your coaches' and your game plan and not the voices of doubt that always try to throw would-be champions off course when trouble arises..
Each one of these contests will be a lot more important to the team than if we hadn't lost some of the nameless contests and had more room for an unexpected "L" in the Loss column (you remember those games and so do I- but now they are dead and buried in the past- that's what archives are for, right?). 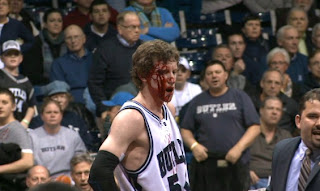 Doubt the "physicality" of the Horizon League? Matt Howard has some blood to show you.

We exacted revenge on Green Bay and Wright State for what they both did to us. Now we have a shot at doing the same to Loyola, Valparaiso, Buffalo and Cleveland State (who- word on the streets now, is most definitely not unbeatable...).

Mix in a little UIC, YSU- what the heck do ya got?... You can see there is a very nice stage set for the Milwaukee Panthers to prove that they are... "who we thought they were".

If the Panthers' can ensure they are fully in Hulk-mode when out on the court for the remainder of this season- what seemed like a lost cause could turn into a wellspring of newfound pride. That is something this team, this program and most importantly, this university- badly needs.