February 28, 2011
My, what an unbelievable trip this season has been. After being all but left for dead earlier this season, your Milwaukee Panthers persevered and battled (winning 9 straight) all the way to the top of the Horizon League standings to clinch the coveted HLT #1 seed and be recorded in college hoops history forevermore as '10-'11 Horizon League Regular Season Champions. 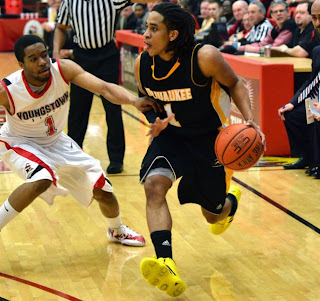 Ja'Rob has emerged as a fearless shooter and leader on this team. #1 helped make us #1.
I think most Panther fans felt a huge sense of optimism after we took down Cleveland State at the Wolstein Center Thursday night. But we knew the next challenge was deceiving. We saw some inspired basketball played by Youngstown State earlier in the season and so we knew that while our game against YSU seemed to favor us on paper... the final regular season contest was not going to be an easy win.

Man oh man, did that prove to be exactly the case..

Back to last Thursday (briefly). Cleveland State had the feel of a championship game. With Mid-Majority's president, CEO and resident word wizard Kyle Whelliston in the stands and tweeting the game almost in real-time to Hoops Nation, the stage was set for fans from coast to coast to follow our awesome victory tweet-by-tweet.

@midmajority even jokingly declared before the game began, "Milwaukee has already won the battle of the shoes", linking to a picture of the Panthers' blazing new kicks. 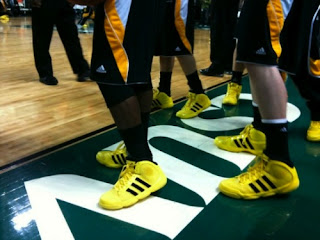 These are the shoes. Fear the Black and Yellow.
But this was very much like a championship game- the league title was on the line after all...

Norris Cole did not exactly live up to his usual self until the Panthers had the game very well in had (we were up by 19 at one point in the second half). But you can't keep a good player (and good team) down like that for long, and like clockwork Cleveland State battled back into the game and nearly tied it down the stretch.

Norris Cole wound up with 27 and Trevon Harmon 22 to lead the Viking attack. But your Milwaukee Panther ballers had answers in spades. Tony Meier was on fire all night and scored 28 points on 9-14 from the field. Ant and Tone both chipped in with 16 apiece and Kaylon tallied 9 assists to bolster our effort. 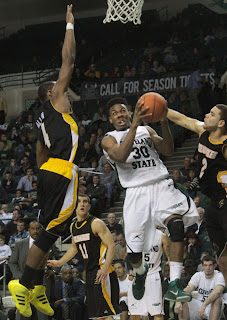 Thanks to some huge 3's and free throws when we needed them most- the Panthers pulled out the win 87-83, in what was the biggest victory of the season... that is- until the following game which had the potential to make the Panthers regular season champions.

Youngstown had the hot hand Saturday afternoon, but the Panthers responded each time. Youngstown seemed incapable of missing for long stretches and Panther fans collectively ground down their finger nails in anxious anticipation of "what was going to happen next".

With just seconds on the clock and UWM and YSU tied up after Tone Boyle sunk one of two free throws to even the score, the Penguins got the ball to an open man. With the win on the line (and Panther defenders too far away falling to the ground in despair)- the shooter missed! And a follow missed! And so hope was kept alive. Much like the Valpo win, the Panthers evaded a crushing defeat, but this time- we only tied. It would take OT to close this one out. 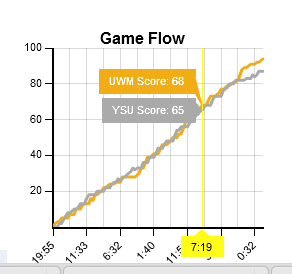 Yeah- it was that close!! Too close for comfort... but we won, so hey?
In the end (OT wasn't all that close- at least not after Ja'Rob splashed his 7th try bomb through nylon to put us up for good) the Panthers prevailed with clutch free throws and won in OT, 94-87. With the win came Milwaukee's first Horizon League Regular Season Championship since 2006.

And when Coach Jeter came into the locker room to congratulate his team, all he could get off was "it's only fitting that we go" [9 for 9 down the stretch!].. before the team mobbed him with shouts of joy:
Great clip- fast forward to 0:35 to see the best part.
YSU was all over the 3pt line and we couldn't stop the shots from going up and eventually splashing in. Blake Allen seemed to shoot nearly every one of those 3's. Allen poured in 26 while going 6-9 from deep. But we had an even better counter-attack. Ja'Rob McCallum, in his best offensive performance as a Panther raked 7 of 11 threes from all around the perimeter en route to a career-best 23 point performance (J-Mac had 6 rebounds as well).
The battle down low was largely won by our own Anthony Hill, who dipped and drove all over Damian Eargel and the other Penguin big men (YSU went with a 4 guard set for much of the game- they scored mainly on jumpers and transition buckets). Ant had 23 points and 8 rebounds while shooting a steller 11-14 from the line.
All of the starters scored in double-digits and played big minutes. Tone put up 16, Kaylon had an excellent all-around game with 11 points, 7 assists, 9 rebounds and was a perfect 4-4 from the line. And last but not least Tony Meier had 18. 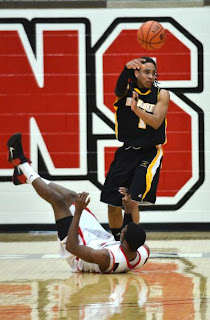 Ja'Rob had an unreal career game against the Penguins. More 3's on the way!
The Panthers off the bench contributed big time, even if not on the statsheet (Ryan Allen has transformed into our best defender (his block on Norris Cole to clinch the CSU victory was one of the best plays of this season hands down). Kyle Kelm continues to show he is feeling more and more comfortable battling in the post in a D-I game.

In short- this road trip was nearly immaculate. Some of us may wish that the Youngstown State game had been a little less stressful, but that is the price to pay. Sometimes the other team is lights out (YSU was well over 50% in the first half and 46% (to our 44%) for the game) and you have find a way to win. Earlier this season, we didn't. We seemed to get discouraged early and shut down when our opponent's were hitting and we weren't.
Nowadays... the tables have turned and the Panthers have that confidence to know they will break a scoring drought and make the needed stop(s) to pull it off. 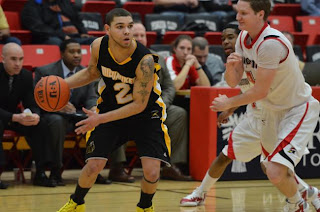 Kaylon didn't just "work out" as our PG this season. He is a huge reason we are Champs.
Big things are happening in Pantherland these days. Milwaukee (18-12, 13-5) tied both Butler and Cleveland State for a share of the Horizon League Regular Season Title (to get "technical"), but they earned the #1 seed and tournament hosting rights as they have the best record (3-1) against the tying teams.
Once again, our unexpected season sweep of Butler made this happen. Without that sweep (even if we'd have beaten Green Bay or Loyola), we'd be packing for Cleveland or Indianapolis- and might not even have the double-bye!
Milwaukee will play this Saturday night, and the opponent is yet to be determined. The first round of the Horizon League Tourney will be played at campus sites tomorrow night. Then the winning teams will come to Milwaukee to battle it out for a right to play either us (#1 seed) or Butler (#2 seed) on Saturday night. 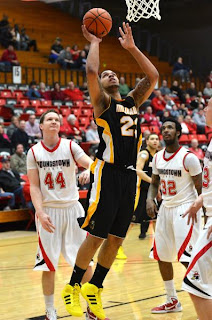 Must be the shoes? Milwaukee is 2-0 in the Adidas-supplied golden kicks..
It's times like these that define an era. I mentioned last post that a win over both Cleveland State and Youngstown State could be a lot more than just the continuance of our (now 9 game) conference winning streak- it is something more spectacular.
I don't even consider it a realistic possibility, but were we to lose Saturday, we would still be invited to the NIT (any regular season league champ who doesn't get invited to the Big Dance is automatically invited to the NIT).

That is by no means what we are aiming for, but I think if you would have told Panther fans that we would be in the NIT about 3 months ago, they would have thought you were drunk or insane.
This has been a long time coming. Maybe it seemed too long for some, but don't think anyone who had to suffer from a bit of impatience (to put it nicely) is upset with this improbable (and still unfolding...) outcome.
And being the (sometimes blind) optimist I am, it would be easy for me to (like some others have already) say, "I told you so" or "why didn't you believe?", but that's all foolish talk now and I know full well had we not turned it around, the joke would be on me! That was then and this is now. 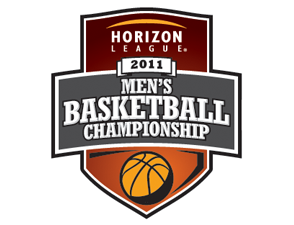 Come out and watch it happen Milwaukee fans. Let's party like it's 2006.
We are all Milwaukee Panthers. And we all share a (sometimes "Krazy") love for Panther Basketball. The criticism didn't bother me as much as the apathy. Though I thought some passionate dissonance among some of our most faithful fans was premature, I knew the frustration meant they care about this team- and that is a good thing.
We all love to be arm-chair coaches from game to game and season to season, but- to a fan- we'd all fold like sopping cardboard boxes, given the responsibility of recruiting and developing a winning Division I basketball program like we have enjoyed here at Milwaukee for these past 3 years and counting.
I just hope this epic never-say-die run by the Panthers will ensure our fan base never, ever gives up all hope before the end of a season. I myself posted on this here blog just before the season's mid-point saying that the Panthers were playing way below their potential.
At best, a very average C (maybe C+) grade is how a prof would have graded our performance from the Portland opener to early December '10). And I stand by that- we knew this could be a great team, and the Panthers are proving just that in this homestretch). As they say when something seems absolutely against all odds, "crazier things have happened".
It's the former fans (some of them very good friends of mine- and some of them, not surprisingly, now fans once again..) who all but forgot about Milwaukee Basketball and refused repeated attempts to get them to come out to a game and remember where they went to school and/or which team wears this great city's name on their jerseys that really got me down at times..
But these kind of attitudes too shall pass- we are now Horizon League Champions. And we will cement that notion by winning the Horizon League Tournament. Only teams that we have already beaten stand in our way.
In closing, before we attempt to pull off one of the most stunning turnarounds in Horizon League history, I leave you with a fitting and comforting refrain that should remind us of our common bond: "everyone's a winner baby".
Hot Chocolate - Everyone's a Winner