March 13, 2011
Well, NIT here we go. For the second time in UWM Men's Basketball history, the Panthers will play in the NIT. The seedings have been announced and so it will be #5 Milwaukee Panthers of the Horizon League playing in Evanston, IL against the Big Ten's #4 NIT seeded Northwestern Wildcats. 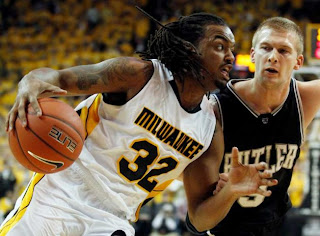 Lonnie Boga is back and healthy. The Panthers are suited up and ready for the NIT.
Pretty big accomplishment despite the letdown vs. Butler last weekend. Let's hope we can make a game of it and make a run into the NIT bracket.

Northwestern is interestingly a #4 seed despite having only one loss to a non-Big Dance team. Milwaukee on the other hand is fairly fortunate to get a #5 seed as they were predicted to receive no higher than a #6 (probable #7 seed) until just a few days ago...

The battle of the low post and the perimeter (I know, how original)- is likely to decide this game. Milwaukee seems to posses a slight low-post advantage with Ant running the block, but Northwestern (esp. Michael Thompson and John Shurna) can light it up from three point range. We need to contain NU's shooters or they will burn our season to the ground.

Remember this guy? He might symbolize the Panthers Wed. night if the shots begin to fall..
I predict this will be a relatively high-scoring game (68-75 point range)- our ability to shoot much, much better than our last game (somewhere around 48%- and especially from long-range) would significantly increase our chances of winning this one and advancing to the 2nd Round of the NIT as we did the last time around in 2004.

Update: Boston College routed McNeese St., 82-64 earlier tonight and so is waiting in the wings for the victor of tomorrow night's contest in Evanston.

The game time and place is this Wednesday, 7pm CST at NU's Welsh-Ryan Arena in Evanston, IL. It's about a 1 and 1/2 hour drive south coming from Milwaukee. Printable directions can be found here. 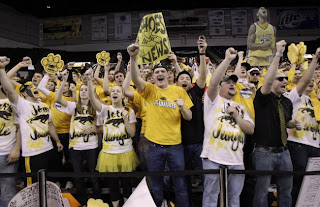 Cheer on! Let's get a decent group of students down there to represent Milwaukee.
This may be the last time a lot of Panther fans get a chance to see this team in person, so let's get out there and show them our support. They have earned it- and they may not yet be done.

From where this program has come from just a few decades ago, to where we aspire to eventually take it in the coming seasons (much, much farther than 2005 in fact), this 2011 NIT opportunity, is a crucial building block and "kind of a big deal". Let's just keep winning- the season doesn't end until we lose!