October 16, 2011
After seeing the first 6 innings of the unpredictable Brew Crew defensively fumble their way to what was inevitably going to result in a loss... I was able to catch the majority of the "Return of Panther Madness" held at the on-campus Klotsche Center this past Friday night. 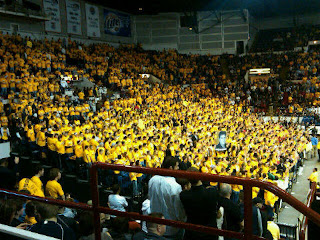 After a two (or is it three?) year hiatus, it was a welcoming return- and judging by the turnout things went even better than most probably would have expected what with the NLCS game and all...

At least 800-1000 students and another 200 or so casual fans, faculty, AD employees and Milwaukee alumni sowed up and seemed engaged and entertained throughout. Overall, I'd say it was a pretty resounding success despite the unintentional scheduling conflict. I would have been there from the beginning, and I understand that a big event like this shouldn't play second fiddle to a non-elimination MLB playoff game.

But many people, like myself (I was born in 1983- a year after the last time the Brewers made it to the World Series), who are huge Brewer fans and remember ghosts of the past from guys like Dan Kolb all the way back to Jeff D'Amico and even Dan Plesac and the dark ages of Brewer Baseball..... missing something that has been nearly 30 years in the making was not an option. As much as I love the Milwaukee Panther Basketball program- the Brewers are the only thing currently front and center for many hard-core Brewer fans.

The most entertaining part of the night for me (being interested in watching the dances, and the musical chairs for iPads and all... but not exactly "psyched") was the Panther Men's vs. Panther Women's team 3pt shooting contest, and the-- oh-so-close to an epic dunk contest between James Haarsma, Kyle Kelm, Ryan Allen, Evan Richard and Demetrius Harris.

The 3pt contest was ultimately won by the women- but our guys team (the focus of this blog obviously) put on one heckuva show. For those (like me) curious to see what Paris Gully can do from outside the perimeter, it was encouraging to see Mr. Gully, unorthodox (James Eayrs-like- "dart-throw") shot and all, essentially destroy his end of the competition (I counted him making 7 of his first 10 3pt shots).

In the end, yes, the women won- but they obviously have a great outside shooting team as well. Look for the women to improve significantly from last season... one that could have been a lot more successful than it turned out (the opposite could be said about the men's '10-'11 campaign).

The dunk contest on the other hand, had all the potential in the world, but unfortunately, the best "almost" dunks fell a little short. I thought Ryan Allen and his high-jump-like leaping abilities would make him the odds on favorite. But it turns out that this season, we have a lot more capable rim rockers.

Ryan Allen did throw down some incredible jams (alley-oop off the shot clock, reverse pump, and though he missed connecting- an amazing self (bounced) alley-oop 180 one-handed throwdown... James Haarsma and Kyle Kelm had some great dunks but weren't able to get into the final round.

Crowd favorite and redshirt freshman Evan Richard provided some of the most impressive dunks- a perfectly executed 360 jam, double-pump reverse jam, and an NBA All-Star caliber acrobatic between the legs reverse dunk that- though he didn't land it- easily outmatched anyone else's attempts.

Evan is an unassuming Beast of a shooting guard. That kid can ball, and I can't wait to see him contribute to this team. In the end, it was biiiiig man- Arkansas JuCo transfer Demetrius Harris and his leapfrog of Mitch Roelke that proved to get the highest score and give him the dunk contest win. With Demetrius and James Haarsma filling the void left by Ant Hill..... we shouldn't be out-sized or out-strengthed by any teams on our schedule- including MSU, MU and UW.

I am more than confident about the Panthers' ability to ward off the bruising post play of guys like CSU's Arron Pougue. We have strong and capable big men ourselves- maybe more than we've had since 2006 (don't forget Kyle Kelm, JJ Panoske (if he doesn't RS), Tony Meier, Ryan Haggerty, "Q" Gustavson, and Christian Wolf) .

I must say, after seeing Demetrius (Harris) and Paris (Gulley) for the first time.. I was more than a little impressed. Those two figure to be a driving force in the paint and perimeter (respectively) for this very promising '11-'12 Panther team. 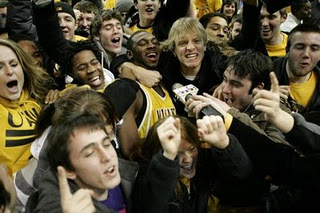 Kaylon Williams was a full participant, confirming that he is still part of the team after the cloudy events of this past summer... Assuming the legal side of that issue works itself out OK (though his mistake was significant, I am pretty sure Kaylon does not have any prior infractions with the Law), I think we'll just have to wait and see how many games Kaylon may have to sit out. And in those games, hopefully Shaq Boga can fill KW's big shoes..

There was some cause for alarm for me when I noticed that neither Lonnie Boga or Shaq Boga were at the event. But they were reportedly back in Missouri due to a death in the family.

Prayers and condolences from Milwaukee fans go out to the Boga family. Losing a family member is never easy. Panther Madness can wait until next year for those brothers. They'll be back and ready as soon as they are able. 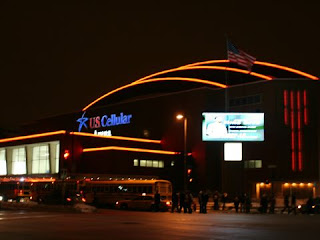 The Arena, The MECCA, The Cell- all are just synonyms for a legendary Milwaukee arena

First thing is first- but know we will be seeing a lot of them this upcoming season. We already know what Lonnie can do (a Lot- outside the 3pt and in the lane). Shaq, with all the fanfare that went into his recruiting is something I know a lot of Milwaukee fans are very interested to see develop as a Panther.

If/when Kaylon is out for any number of our first few games- Shaq is going to face a very challenging test leading this experienced team from the point. I'm pretty confident that he's up for the challenge and won't be phased..

The crowd seemed (almost reluctantly at first, but eventually "genuinely") in to the event. I heard more than a few in the crowd more than happy about the fact that they were getting not only a free hot meal of everything Pizza Hut had to offer (I believe I saw over 200 empty boxes of pizza to go with the 75 left at the end of the event) but also an awesome gray Milwaukee Panthers tee featuring a prominent (read- huge) Panther Head logo on the front and "Milwaukee" on the back shoulder area.

Could these shirts be designed to fill the crowd with gray shirts to complement the rumored new "gray" home jerseys we have been hearing about? Though I'm not yet sold on the idea of gray home jerseys (K-State's gray jerseys do look nice), I think that's a good guess.

In any case, new gray jerseys and Panther Hoops newcomers and Panther Madness aside- this is shaping up to be one very memorable Milwaukee Basketball season. I think the program gained a lot of new student fans who will show up for the early season contests down at the Cell...

Assuming we can avoid disappointing them and reel off some wins to a healthy early start (ie. upset Michigan State! upset Wisconsin! upset Marquette! Give the students something to believe in!)..... we could have much better student section (and overall) turnouts this season. Bringing Panther Madness back was a great idea and a great investment. So long as this team plays like I think they will (lots, and lots of wins in '11-'12).... 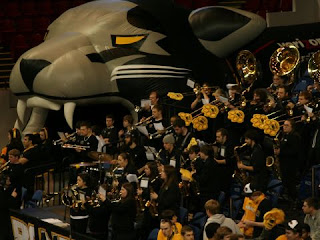 Panther Band doing what they do best

.........The Panthers may just finally return to March Madness, in this, Coach Jeter's 7th season leading the Panther Pack. And perhaps Panther Madness will be a big reason why. Students get loud, students provide a 6th man and home-court advantage. Ultimately, a big part of this program's success really does lie within the interest, enthusiasm and active attendance of the UWM student body.

I hope they came away with some interest, respect and some intent to get out to the Cell for more than a few games this season. We need all the rowdiness and support that our Milwaukee students can provide. And students need memorable college experiences which Panther basketball games provide. It's a win-win situation.