Milwaukee's Bigtime Second Half Rebound Not Enough to Topple #14 Wisconsin

December 15, 2011
In a game-ending sequence eerily reminiscent of last year's fumble against Marquette at the Cell, your Milwaukee Panthers came up short in their earnest bid to beat the Wisconsin Badgers for the first time since 1992. 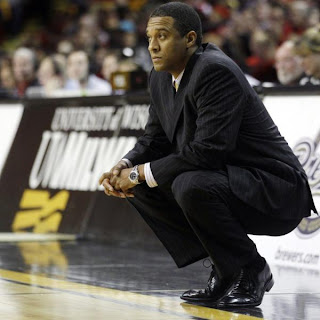 The game started out with the Panthers shooting colder than a Polar Bear's toe nail. Milwaukee (8-3 (2-0)) just wasn't completely on their game- and a savvy observer would understand why. We were playing without two of our '11-'12 projected starters.

But the Panthers battled on the defensive end. James Haarsma battled no-holds-barred with Wisconsin's bigs. I have no doubt he (and Hags and Meier) left a lasting impression on the Bucky Big Men. 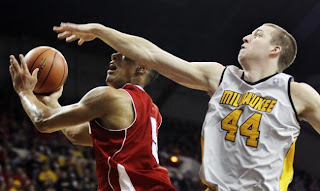 Oh well. One half does not determine the end result. Wisconsin put up their usual plodding 30 points and led 31-20 after 20 minutes of play.

Although some kind of inspiration obviously happened in the home team's locker room, it wasn't clearly evident in the early goings of the second half. The Badgers slowly extended their lead to as many as 17 before the Panthers saw that despite their being 16 minutes left in the game, a run had to commence- lest we let the game get too far away.

And that is when we started to really dig in defensively and pour it on offensively. 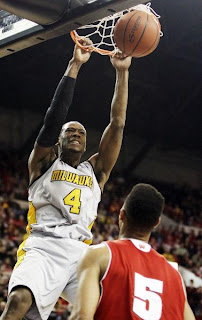 It was at about this point that UW fans realized that the Panthers came to play.

Slowly but surely the Panthers chipped away at the Badgers 17 point lead. With threes and dunks and And-1's, Milwaukee tied it all up 48-48 on a lane-storming Tony Meier lay-in with 5:22 left. The largest home crowd in UWM regular season history of 10,000+ went bananas.

This one was going down- to- the- wire.

Down just 3pts with the clock winding down, we still had a good chance to at least take this to OT. But the Badgers' point man dribbled to the Panthers' top of the key, stepped out, and rolled in a crushing trey bomb.

The veins on Bo Ryan's head certainly indicated the entire Badger bench was worried out of their minds that they might let this one slip.... but they looked very relieved when Taylor's shot rang true. 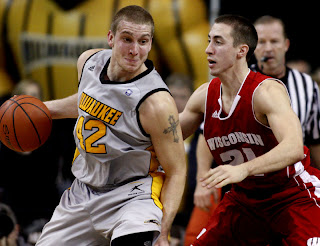 James Haarsma was a lot to handle for UW. What does that say for the Horizon?

A great game to watch overall and the student section held things down strong (esp. the blue section). But our free throws.... well the numbers don't lie (7-17). Just 3 more makes and this one may have turned out in our favor.

We must make more of our free shots or we are going to lose a lot more close games like the one we saw Tuesday night. Our three point shooting seems to vary between red hot and ice cold, but on average has been pretty decent for the season (33%). If we could boost our free throw percentage by just 5-7%, it could mean a big difference.

There are a few other things/stats one can to point to in explaining our "almost" win, but that's just the way it goes down sometimes. Would people rather we had shot 90% free throws, 50% from FG, 40% from 3pt and still lost by 10? Our guys showed real fortitude out there. 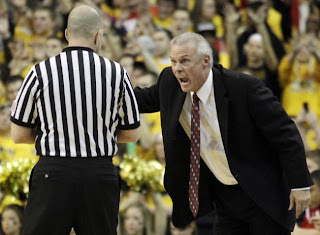 As this was the final game of a 3-1 contract with UW-Madison, let's hope the series continues (hopefully with a more equitable and respectful 2-1 deal). This loss against a very good team (UW will be in the Dance, yet again- count on it), has made us better already. Wait until conference rolls around..

I think it's a great matchup and pits not only two great D-I schools (albeit with Major differences in budget and historical success), but also a ton of friends, relatives and co-workers who are fans of one or the other (or in many cases- both) teams.

It's a win-win situation for all involved and only irrationality and/or pride will get in the way of renewing the series (the same goes for the series with our Navy & Gold neighbors across the block). 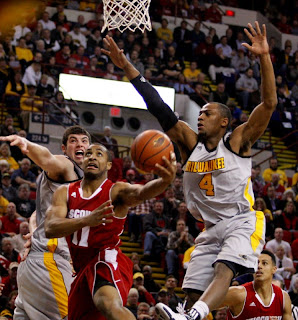 This photo pretty much captures the effort put forth by both teams. Tough.

Onward we march as a Panther Nation. Up next is a provisional (read- "new") D-I school- the University of Nebraska-Omaha. But make no mistake- though Vegas odds will likely be favoring us by double-digits- the UNO Mavericks (4-7) are going to come ready to play. They played Sparty as well (even if they did lose by 42 points..).

We all remember what happened last time we played a regular season game in the Klotsche.. Let's erase that memory by getting the big W #9 against UNO to close out the week on a positive note.