NIU Keeps Milwaukee Out of Striking Distance, Our Panthers Fall 67-51

December 11, 2011
The game was a lot closer than the final score would indicate, but it is true that though Milwaukee kept the pressure on and had NIU's lead between a manageable 8-12 points for much of the game, it just wasn't enough. 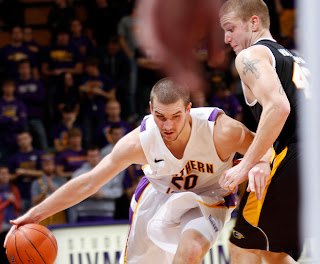 Koch and Co. were just too much for Milwaukee this past Saturday

None of Milwaukee's stats jump out as horrible (other than perhaps the 26% from 3pt on 19 attempts- but even that isn't downright terrible). We just couldn't keep up with a very talented and well coached Northern Iowa team. Jake Koch (21pts) led the NIU offensive charge and was easily the best player in this game.

Although we didn't play terrible, there were definitely some things that can't be repeated (esp. against teams like Wisconsin and Marquette) if this team is going to be as good as I think they can be this season. Needless to say, we'll have to shoot a whole lot better (esp. from 3pt.), guard the perimeter, protect the ball (14 TOs against NIU), and most importantly- get those offensive rebounds for second chance points.

We had just 5 offensive rebounds against UNI. We have to kick it up about 3 notches. The entire month of December is going to be a tremendous challenge. I think we can escape with just a couple losses at worst, but it will take some really concentrated effort on fixing the little things that have been hampering an otherwise stellar early '11-'12 season for Milwaukee.

So, it stings, yeah. But so what. This was a game we weren't supposed to win- and we still made it competitive until the final 5 minutes. UWM lost for the first time since we dropped the ball in East Lansing against a formidable Michigan State team. All is not lost though. Milwaukee (8-2 (2-0)) was an 8 point underdog and Northern Iowa is going to compete for the MVC crown.

It would have been a key road victory, but if nothing else it's a teachable loss. Maybe this will spark the team to an unprecedented upset of Wisconsin this coming Tuesday (by the way- tickets are moving fast so reserve a spot- that should be a pretty good battle in the Cell if Rob Jeter's Panthers can shoot the ball like they did vs DePaul and defend well).

Up next is (yet again) the biggest challenge of the season thus far. Make no mistake- UNI is a team that could battle Wisconsin to the wire. And there is no reason we can't do the same. Tuesday is not a make-or-break game for the Panthers' season.

But in a lot of people's minds, it does hold the potential to (for a brief period of time) remind themselves that Milwaukee Panther Basketball is alive and well and can actually still stick around with the big budget boys.