Panthers Mop up Loyola, Get Taken to the Wire by UIC, Hit the Road for Two Big Tests

December 04, 2011
Your Milwaukee Panthers were able to fend off both Loyola and UIC Thursday and Saturday afternoon. One win came easy, the other one, was a real nail-biter. 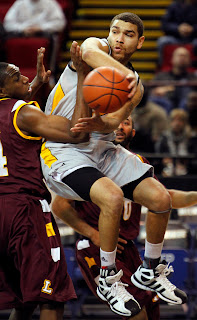 Kaylon is leading our troops to a "T" and doing great showing Shaq the ropes.

The Loyola game was played close throughout the entire first half. Walt Gibler (13pts, 5rbs) was able to get to the line with relative ease and converted most of his free points. Ben Averkamp (12pts, 2blk) served as Gibler's main supporting cast.

Milwaukee went into half leading 22-18. Things were looking shaky on offense, but our Big Milwaukee "D" was holding down the fort and forest in keeping the Ramblers to just 18 points through 20 minutes.

Then came a huge second half tsunami by the Panther offense, and we stretched the lead well into double digits en route to the decisive victory 59-41. FG% (Milwaukee lead Loyola, 44% to 36% on the night and got off 13 more attempts) and a huge rebounding advantage (38-19) were the determining factors in this one.

We got 13, 12 and 14 points from Kelm, Williams and Allen, respectively, and Evan Richard chipped in 7 points. Tony Meier (3pts, 0-4 from 3pt in 18 minutes) made his '11-'12 season debut as he is being slowly eased back into the rotation as he shakes off a little rust and gets back to being the most dependable shooter on the team. 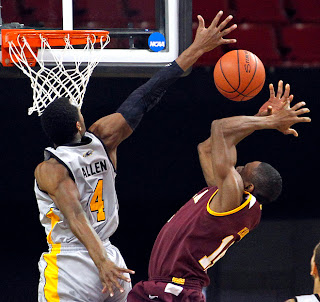 Ryan Allen- Milwaukee's X-Factor. Have you noticed his improved shot? It's night and day.

It didn't take Tony too long to shake the rust off.

In Saturday's contest, a game in which these Panthers were favored by 15 and 1/2 points over the UIC Flames, Meier (9pts on 3-7 from 3pt in just 16 minutes) showed that it won't take long for him to get back into his normal sniper-style shooting form. That was the good news. The bad news is, we came about a half a foot from losing this game.

UIC played tough- make no bones about it. But Milwaukee did not play the suffocating D that has become there staple this season during regulation- and this led to an equally shaky overtime. As a team overall, we didn't shoot terrible from the line as we didn't shoot incredibly terrible.

But as has too often been the case, we did miss some very key free-throws that could have provided the dagger- in regulation- we needed to put out the Flames and escape with victory.

Fortunately, with a huge Paris Gulley three in the closing seconds of OT and a huge Ryan Allen block, coupled with just enough free throw cash-ins by James Haarsma and Kaylon Williams, we secured a razor thin margin of victory, 73-71.

Kyle Kelm had a huge game (18pts and 5rbs) . K-Dub equalized his 2-9 from the charity stripe by scoring 13, grabbing 5 boards and dishing out 5 assists. Haarsma provided a big time post punch adding 14pts and nabbing his average of 9 rebound (man, if that average can go even further up- watch out Horizon League! ...heck, watch out Wisconsin and Marquette!).

As good as all this news is, once the team gets a huge piece back in Meier, Ja'Rob McCallum (missed both UIC and Loyola) is listed as day-to-day as he aggravated a wrist that he had surgery on during the off-season. Here's to hoping he gets all the rest he needs and can get back on board making this Panther team as deadly and deep as it has the potential to be.

Also, Lonnie Boga remains sidelined with his shoulder injury. Some rumors had it that he may be considering a red-shirt. You can never trust rumors, but if it were true, we do still have depth at the shooting (or in Lonnie's case strong/shooting) guard position, but it would be a big loss. Lonnie (a Junior would have 2 more instead of 1 more years of eligibility if he red-shirted this season) would also be able to play one additional year with brother Shaq, who is slowly coming into his own in this, his freshman NCAA season.

Seeing those two on the same team for an entire additional year could be a big-time advantage for the Panthers. Everyone who has ever seen a team grow, mesh, get momentum and start routinely crushing opponents- chemistry is 90% of the formula. Those brothers could be a sight to see once they get on the floor together. 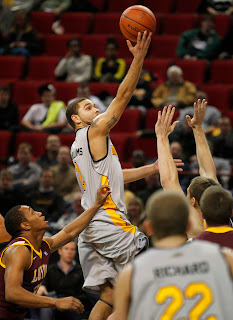 The Panthers (7-1 (2-0)) have now moved out to their best record since the '92-'93 season, a season which interestingly, wasn't as successful as 2005, but also was the last season this program beat the Wisconsin Badgers- in Madison no less, at the then-home to the Badgers, the old UW Fieldhouse.

Those Badgers will be coming into a raucous Cell on Dec. 13th, but whether the Panthers will have enough bite to make that a great game will be easier to predict once we see how they handle the next two big road challenges.

First up is at the All-State Arena in Rosemont, IL against the DePaul Blue Demons of the Big East. Make no mistake- DePaul is a lot better than their 4-2 record might make them look- they lost their 2 games by a combined 3 points- to Minnesota and Ole' Miss. After that, we travel to Iowa to take on a 7-1 Northern Iowa.

No reason we can't just keep punching it through in the winner's lane, though. UIC made us look pretty bad at times, but we battled and kept the momentum alive. We have just finished shaking the rust off.

We now see that this team is very capable of winning the games they are supposed to win. That is big part of success. But we are going to find out real quickly whether this team is also capable of pulling out victories- on the road- and at home, that are against the odds.

If  this team proves they can, you can be sure that there will be a lot more optimistic UWM fans in the Cell when Bucky comes to town. If I were a betting man, my money's on Rob and the Milwaukee Panther World Class Wrecking Crew.

Keep it tough (esp on D- but points are needed to overcome inevitable defenses lapses!), and they'll keep it up. No question in my mind about that.