January 13, 2012
The 600 or so brave souls who (and the the 300 or so cheerleaders, band, US Cell staff, etc.) decided to brave the dangerous icy roads last night to watch the Panthers take on Wright State got to see a Panther team at it's best. It was an unforgettable performance (esp. by our defense). 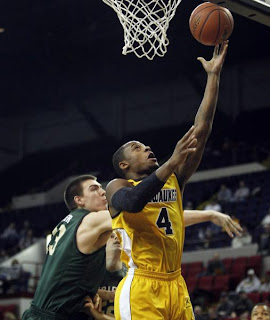 Ryan Allen is sparking a fire in the Panthers that may be impossible to extinguish.

The gameplan couldn't have worked out much better. Ryan Allen, unquestionably a candidate for Horizon League Defensive POY, completely shut down the one weapon in the Raider arsenal that could have made this a game.


NC State transfer Juilus Mayes, who, coming into the game was averaging 18 points per, was limited to just 3pts on 1-7 from the field. Allen was on Mayes like glue, and Julius could not shake Ryan off.

So with Mayes out of the equation, and our shooting touch heating up quite a bit from some of our recent contests (47% on 47 shots), this one was in the bag before it got it's bar code scanned.

Milwaukee (12-6 (5-1)) cruised to an impressive defensive-driven 58-38 victory and put themselves solely atop the Horizon League standings with their now 5-1 conference record.

Our offense (other than the 16 TOs) was right there to compliment the incredible defensive effort. James Haarsma battled tough down low en route to 13pts and 7rbs. 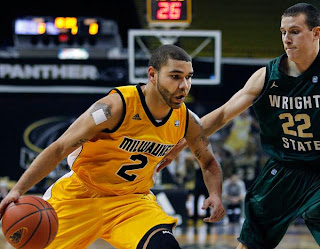 Kaylon commands the troops. It was very audible in the sparsely attended game.

Tony Meier (16pts on 4-7 from 3pt to go along with 7rbs) had a great bounce-back game. After some inconsistency since returning from his calf injury, I think Tony is starting to really settle in to his "go-to" shooter self.


If he can rake 3-4 triples for us each game- our gameplan can work to a "T" and you'll see more blowouts like this, than fumbles like UW and Butler (and you could argue UIC and Green Bay- though wins... those were not terribly well-played games by the Panthers).

Coach Jeter removed all starters other than Paris Gulley at about the 6 minute mark and the Raiders still could not eat into the 20 point Panther lead. This game showcased some spectacular basketball, even if it wasn't exactly "thrilling"). Hey, it's not our fault Wright State couldn't handle the "MJD" (Milwaukee Jeter Defense)).

All around applause for everyone on the team. Wright State is not as bad as that loss made them seem. If we can continue to play like that against other conference foes, we could still host at least one very, very important game in Milwaukee on the night of Tuesday March 6th. 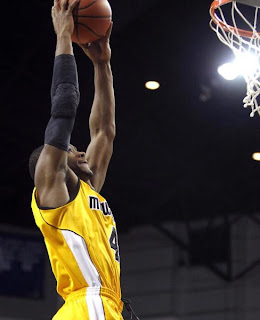 Up, up, and away. Allen is one of many reasons Panther fans are hopeful.

Our conference-leading status will be challenged this Saturday night in what figures to be a physical and emotionally-charged game (Detroit cannot be too happy with how low on the totem pole they sit, with them being picked by the "experts" to finish #2 and us (picked #4) so far ahead of them in the standings.

Detroit had some off-court issues that kept Eli Holman out of some games, and they lost starter Nick Minnerath for the season in one of their first games of '11-'12. But they still boast Ray McCallum Jr., Chase Simon, Eli Holman (yes, the ol' jawbreaker himself is back) and a few other players that could go off for double-digits on any given night.

Detroit is a hard team to figure out (much like Youngstown State- but on the opposite side of the winning/losing spectrum). I think they will eventually break out and salvage somewhat of a respectable season.


But the damage has been done, and though they've improved, I know deep down they are still reeling and trying to figure out "what just happened?" [from November '11 to now].

Let's not take this one lightly though. After holding our (now) second opponent this season to 38 points or less (apparently the first time that has happened since the 1950's per Milwaukee SID, Kevin O'Conner), we should be confident and standing tall against this deteriorating Titan squad. 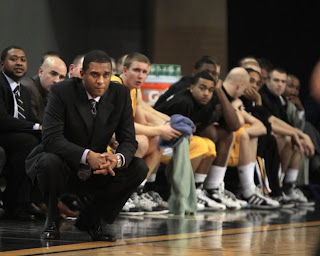 Everyone on the entire team needs to believe we will succeed- or we are sure to fail.

I can tell you one thing- the odds of us holding Detroit to less than even 50 are going to be long. There will be a lot of exciting post play and more than a few thunder-clap throw-downs (mainly our Ryan Allen and Kyle Kelm, and DMU's Eli Holman and Ray Jr.).


We'll have to slow the pace, pick our shots, and, if we play Milwaukee D like we have all season- we can pick up our 6th conference win and start to create some seperation between us and the other League teams currently vying for the title (YSU, Valpo, CSU).

Weather permitting, you should see a lot more fans down at the Cell Saturday night. People in Milwaukee are starting to take notice of this team's positive direction. You can't keep a fast-improving and exciting team hidden forever. No matter how many times people try to knock Jeter and this program.

Let's D-up and shut down Detroit and rain an impressive percentage of jumpers just as we did against Wright State.

Do these things and we'll send the Titans home packing even further buried down in the conference standings. We've reversed fortunes after the Butler meltdown and the Western Michigan reality check. Let's make it 3 in a row and just keep adding to it... Add it up.