January 09, 2012
In the first contest of our annual in-state and conference rivalry games with Green Bay what else should we have expected? In years past we've had nearly every one go either straight down to the wire or pretty darn close to it.


This past Saturday night's game was most definately of the former variety- and it was your Milwaukee Panthers who emerged victorious after playing possum for about 35 minutes. 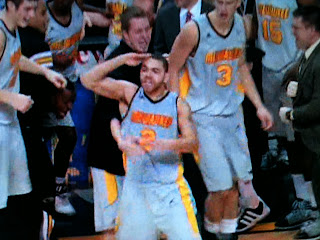 Kaylon Williams shows Sykes who got the final salute in this one.


Kaylon Williams (13pts, 4rbs, 7ast) wasn't going to allow a loss to the Phonenix to happen. He decided to take matters into his own hands.


With just 1.1 seconds showing on the Cell jumbotron and down 63-61 (the entire game on the line) and asked, (as any PG would be) to inbound the rock for one last desperation shot, Williams apparently felt that he had the hottest hand in the huddle and asserted, "I want the shot". That proved to be the right choice- for Kaylon and Jeter and everyone who believed he was the most confident shooter on the court in that immensly tense moment.

So instead of Kaylon, Paris Gulley in-bounded the ball and that 1.1 second time frame became a blur. Kaylon caught the in-bound, somehow completely wide open near the East side of the top of the key, and (despite having shot 0-3 from 3pt until that point), drained the biggest game-winning shot since Deion James stunned the UIC Flames at the Cell in late January of 2009. 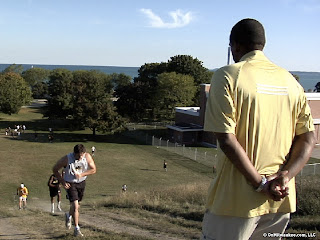 It's for games like this thriller that our players run the "Hill". Perseverance pays off.


Alec Brown (8pts, 12rbs, 2stl, 5blks), though obviously with quite a bit of footwork to learn yet, proved to be a little bit (but fortunately not too much) to handle for the Panthers down low. Look for Smith to get better in each of his remaining years of eligibility- he is a big and talented dude in the paint.


The real thorn in the Panthers side all night who nearly willed Green Bay to an upset (we were 8.5 point favorites in this one, folks) was Keifer Sykes (20pts, 3ast, 3stl). Sykes was a mad man somehow machining his way through our defense and getting into the lane when and where he wanted.


And yet, in an ironic twist, the turning of the tide late in this game seemed to be when the Basketball Gods frowned on  Sykes', after throwing down a transition jam, giving a mocking military salute toward the Panther student section. "Bone-headed" doesn't really do his "dunk dance" justice. A technical was whistled and we got 2 foul shots (both made and the ball back). Sykes (despite his great offensive performance) may very well have cost Green Bay the game.


Momentum and energy were all with Milwaukee in the closing minutes. The relatively nonchalant crowd who seemed to expect an embarrassing home loss suddenly sounded nearly as loud as it did, late in the Wisconsin game, even though the attendence was less than half. This was a bona-fide thriller.


Sure it would have been nice to win by double-digits and TCOB of a talented but not exactly even Mid-Major Top 25 calibar conference foe. But these kind of game-on-the-line experiences increase our chance of pulling it off when we need to (MU at the Cell last year, UW at the Cell this year, etc.).


Haarsma got back to his usual self in the box score totals (14pts, 7rbs) and Paris Gulley added a nice 18pts, 4ast and 4rbs. Most impressive of his line is that Paris drilled all 8 of his free throw attempts (and yet, we still shot just 11-19 (58%) as a team.. free throws, free throws..).


But no unnecessary complaints from this fan. I think they'll work out the kinks and start making more hay from the line... but man, it is rough to watch sometimes. I think things (the team, overall) are headed in a good direction. These next two conference home games will either lend credence to or cast doubt on that feeling. 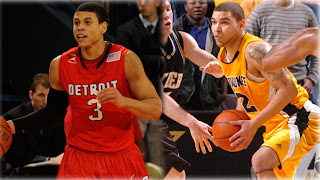 Who would you prefer manning your team's point? My money is on Clutch Williams.


Next on the docket is a battle-tested and quickly improving Wright State Raider team again, here in downtown Milwaukee. The Raiders (9-9 (4-2)) are winners of 5 of their last 6 and absolutely crushed Valpo at home and lost to Butler by just a point. They are coming into a Cell that has been unkind to them in the past- but they are heating up as of late and this will be a tough fight.


Every conference game is going to be a battle from here on out. Heck Youngstown State (9-9) already has as many wins as Butler. That says a LOT if you know the Penguins' less-than-stellar Horizon League history.


Let's just stick with the cliches and "focus on one game at a time". What's done is done (can't we at least have the Butler game back?!! Ha), and we are still off to one of the program's best starts in recent memory.


This team has the depth which gives us the fortune of not having to rely too heavily on just a few players. Saturday night was yet another great effort of the next man in stepping up, getting it done and then some.


If only (or maybe "just wait until"?) we got everyone clicking at the same time- night-in and night-out. Thursday would be a good place to start. Let's just keep piling up W's and see how dang good (or not-so-good) we really are when the smoke clears.