February 02, 2012
Ok, so things haven't panned out so well for your Milwaukee Panthers since my last post. I've been busy with some things and admittedly it's a little more difficult to write posts when the team seems to be sinking like the Titanic. 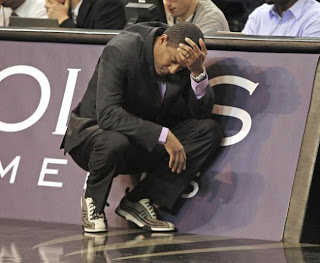 Our Coach and his players are being assailed from all sides. Not all have given up hope though.

We have lost 4 of our last 5 games (most recently to Youngstown State, who completed their first season sweep of us since... the 90's?). I'd love to recap our iron-clad defense-led, 53-42 home win over Butler in the very entertaining US Military Salute event that went off without a hitch at the Cell... but that seems like ages ago.

But unfortunately, though our "D" was suffocating (read- awesome), the only difference between that game and the two that followed (lost a heart-breaker to Valpo, 55-52 (after being up by 8-10pts all game), and a numbing loss to Youngstown State, 73-65 (that Kendrick Perry cat dropped 30 on us)- was exactly that- our "D". Our offense (mostly all season, but particularly since our home win over Detroit)- has been consistently shaky at best.

Milwaukee Panther offense has been missing for most of the season; and it has been at it's worst in these past few losses- and it's been pretty bad even in a few of our wins. Against Butler (our last "W"), we shot 38% FG, 25% 3pt, 33% FT. Far more often than not, that won't get it done.

It has been rough, no doubt about that. We need our offense to step up and score points, shoot at a higher percentage from everywhere. We thought free throws were a problem- now 5 footers and 3's are even hard to come by at a consistent rate. 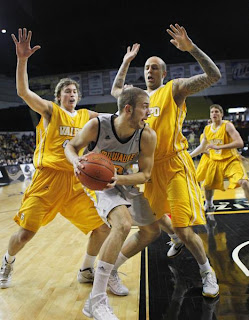 Valpo trapped us and cemented our slide stretch... but we can Recover.

The last home stand was a prime opportunity for us to really make a charge and climb up the Horizon League standings. Create some separation, eh? Get some "road-loss" insurance, if nothing else. Instead, we fell back to the middle of the pack (currently 4th place, but still only 2 games out of 1st), and left many casual observers wondering, "what happened to that Milwaukee team that started out 13-6 (6-2)?".

Milwaukee (14-10 (7-5)) is down but not out by any means yet. There are still 7 games (6 conference) to be played in the regular season, and depending on how well we can finish, anywhere between 1-4 Horizon League Tournament games left. We can still salvage this season. 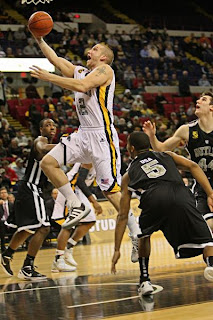 Haarsma may be one of the undeclared walking wounded. His minutes have gone down.

It will take some soul-searching and some superhuman performances from the players we have left and some players who aren't used to seeing prime-time minutes (now's your chance- make hay with it or watch it vanish). We did it last year and there is only one thing that could prevent us from doing it again this year (see below).

We have been decimated by injuries. It's now inevitable that Ja'Rob McCallum will take a medical redshirt for his wrist injury and will not play again this season.

Lonnie Boga has been out all season, and after shoulder surgery, he is returning next season- his presence was sorely missed in '11-'12. Evan Richard may or may not return due to a back injury, but the prospects don't look too good. He has not suited in the last several (5?) games. 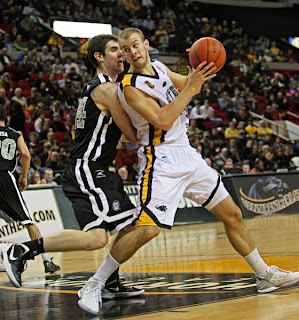 Let's remember the good 'ol days, shall we?

Kaylon Williams has been battling through a nagging sprained/sore ankle and general fatigue that comes along with playing 35 minutes a game- Ryan Allen is the only other player who comes close to those minutes.

And Allen, along with Kaylon has been one of our superstars. But as of late, #4 has been battling leg/calf cramps, knee sprains and fallen (sometimes been pushed to) to the floor in virtual each of the last 5 games. Kyle Kelm was recently informed that his nagging sore foot is just healthy enough to make the cut to finish out the rest of this season.

And this is just listing the guys who obviously have nagging or season-ending injuries. I'm sure others are battling through lesser injuries and their performance has suffered because of it.

Everyone needs to rest and regroup for the final push. Luckily they have had at least some rest since YSU and will have another 6 days after the Green Bay game this Saturday at the Resch Center.

But all is not lost. Again, one can't so easily forget what happened after Valpo handed us our you-know-what on a platter at the Arc in January of 2011. 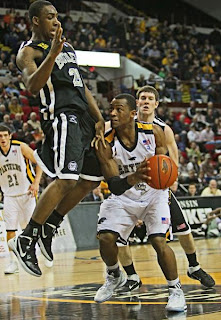 To make it all come together for an improbable run- we need trust, and smart play.

I'll leave everyone with this quote to ponder..

“Nothing in this world can take the place of persistence. Talent will not; nothing is more common than unsuccessful men with talent. Genius will not; unrewarded genius is almost a proverb. Education will not; the world is full of educated derelicts. Persistence and determination alone are omnipotent. The slogan "press on" has solved and always will solve the problems of the human race” - Calvin Coolidge, 30th President of the U.S.A.


Don't think we can make a final push? I wouldn't think so rash. A lot can happen between now and early March. Perseverance is a crazy thing.