November 02, 2007
The dirt has been brushed off Rob Jeter and Co.'s shoulders. A new season, and more importantly, a new era of Milwaukee Panther basketball has arrived.

That may sound more than a bit presumptuous, overly-cocksure, naive, lunatic- pick your adjective. The reality is however, that the lessons learned in last year's “rebuilding” campaign have produced a core of experienced, excellent returning players who are ready to lead a group of newcomers whose potential has a ceiling higher than than the roof of Miller Park. Consider the Panthers who hit the floor this coming Thursday, “The Milwaukee Panthers: Reloaded”. 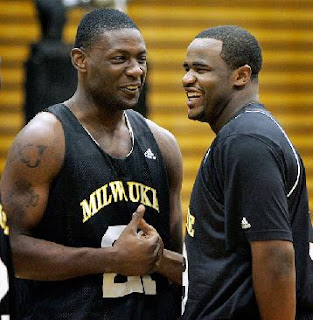 Jeter may not be able to do the “Hambone” and “Soulja Boy” moves like his mentor, Bo Ryan famously (see-YouTube if you haven't gotten the chance to enjoy that hilarious ditty) displayed for Badger fans at their midnight madness party, but he knows how to lead a team into in March, and he has convinced his team and a steadily increasing number of fans, that this year's Panthers (and the Panthers for years to come) have all the right moves to show Milwaukee, the Horizon League, and believe I said- the nation, that Cinderella can still dance.

'Nuf said- Milwaukee Panther Basketball is back- in a big way. While last year was a time to develop the remnant scraps of an empty cupboard left by Jeter's predecessor, Bruce Pearl, this year figures to tap into those now-polished resources which are now ready for big time, while, finding much more than off-the bench or garbage time to include some freshman newcomers and upperclassmen transfers who will undoubtedly make an immediate impact- how much of an impact remains to be seen, but the odds are on Panthers side (Torre Johnson, Milwaukee native and transfer from Oklahoma St., averaged 10.1 points and 4.2 rebounds per game in the Big 12- no that wasn't a typo, that “Big 12” (ie. Kansas, Kansas St., Oklahoma, Texas, Texas A&M, etc.).

While one much anticipated transfer, the machine that is G.I. Joe Allen of Milwaukee Juneau, St. Mary's college in Texas, and the US Army, is out due to a freak injury suffered at Panther Madness during warm-ups (he will return next season once fully healed), others included in the new Panther arsenal are Tulsa transfer Deion James, and one of the most impressive recruiting classes in not just UWM, but Horizon League history.

Jeter and and his fellow coaches were able to attract the incredible talents of two Chicagoans- Kevin Johnson and the Barkley-esque Tim Flowers, coming in at 6-6, 220 and 6-5 250, respectively. Oh, and how could we forget to mention that these two gentlemen were teammates of a “kinda” well known Memphis PG recruit- Derrick Rose, and their Chicago Public Schools Simeon team ended last year ranked #1 in the country by USA Today and other news outlets (and surprisingly, but testament to his talents, “Flowers” not Rose was voted the team MVP by teammates). That being said- they haven't played a single NCAA D-1 game, so we'll all be pleased with the potential, but wait, and watch it develop.

Additionally, the freshman class includes PG Deonte Roberts, who graduated H.S. from St. Bernard's in Minneapolis Minnesota, earning All-State Mr. Basketball honors, before spending a year at one of the top basketball prep schools in the nation- Notre Dame Prep., during which he committed to UWM. Anthony Hill, a Milwaukee product who played his prep ball at Bradley Tech adds much needed height (he's 6-7 250 lbs.), and Brad Carroll a 6'6” PG and Arizona native, is along for the ride, and from early practice and scrimmage indications- he and Hill while at first not seen as the cream of the spectacular recruit crop, could both make major contributions- these kids can ball.

These group of newcomers, the transfers, and the returning core could be some of the best athletes to come through the Milwaukee Panther Basketball program in a long time. Paige Paulsen, Avo, Ricky Franklin, Roman Gentry, Kaylan Anderson, Charlie Swigget, Al Hanson, and Marcus Skinner have an army of help- put it that way.

So there is your introduction to the '07-'08 UWM Basketball team. Now, on to the action. On Thursday, November 2nd as the Panthers play UW-Parkside in an exhibition game at the Cell (that's the US Cellular Arena to be proper, but get used to it's shortened reference- for UWM Basketball, it remains the “Cell” (or the “Arena”, you're preference- it was the “Arena” when the Milwaukee Bucks took the NBA title in 1971, so that has become like indelible ink for many Milwaukeeans who were lucky enough to witness that)).

This game would normally just be blip on the pre-season radar, however last year in a contest that caused attendance to suffer drastically throughout the season (collectively sighing in the wake of such great (and almost then, “expected”) success for the basketball program), the UWM student body, alums and all fans alike asked, “We got beat by who?”), UWM fell to Parkside, by a score of, well yes, we lost to a D-2 school; let's not bother with the score- it was an exhibition game after all- they just played better than us last year; this next contest will at least have that bit of revenge-fueled excitement to add to the show. I should include that a record of 9-22 didn't help attendance either, but the exhibition loss set the tone for a year of mediocrity and (read above), it really wasn't expected to transpire otherwise. 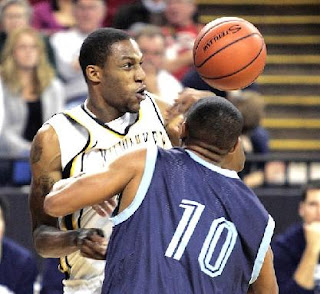 This year figures to be a whole lot different. Put on your Milwaukee Panther gear, get ready for games against Marquette and the Badgers here in town and a host of other great contests at the Cell, and get ready for the entire Horizon League to (quite possibly) catch one incredibly rude awakening.

The Panthers have awakened from a year-long slumber to rock college basketball nation once again. Or so I suspect. We will find out soon enough.
Milwaukee Milwaukee Basketball Paige Paulsen Panthers Rob Jeter Tim Flowers Torre Johnson UW-Milwaukee UWM Wisconsin-Milwaukee