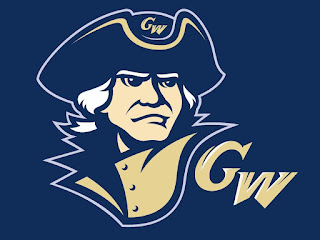 Milwaukee had a chance for a quality win but today was not a great showing for Panther basketball; we need some rest

The sloppiness might have caught up to us. Maybe we just ran out of energy as this was the last of 3 games in 72hrs. This was good experience though.

George Washington (3-4, 0-0) is a great program and they are a good match-up for us. They seemed to be at around the level of play we are at right now (good enough to beat Wright State but not good enough to beat Wisconsin or come within 20 of Kansas).

In a marked departure from yesterday when we shot almost 50% from 3, the Panthers could not open up the lid and struggled big time from 3pt land which likely sealed our fate today. 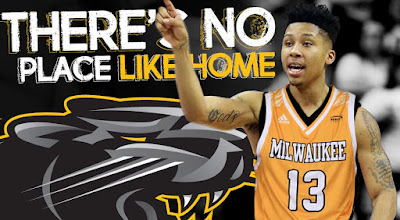 All of Milwaukee Panther Hoops Nation hopes Te'Jon Lucas is OK; he went down hard late in the game today

That (15.7%) was the success rate from long-distance today; far too futile to put us in a position to win.

Down by 8 we kept making a run at closing the gap but could not sustain a run long enough and each time a glimmer of hope flickered- GW would splash another 3 to push their lead back to double digits.

In the final 5 minutes George Washington diligently maintained their 10pt advantage by knocking down free throws and protecting the rock.  A scary injury to Te'Jon Lucas in which he seemed to sprain his ankle or bruise his knee seemed to not be as serious as it initially looked. 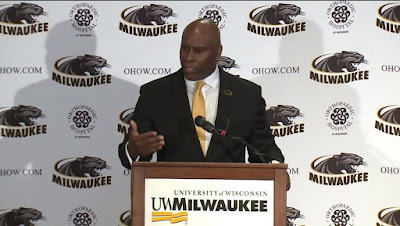 The buck stops with Baldwin; lets hope he leads this team to close out some of these close ones and avoid the droughts

But!- it wasn't over yet. Seemingly by sheer willpower, the Panthers clawed back. From being down as many as 14 points to being down 6 to down 4, down 6, down 5, down 4- with 20 seconds left- we kept making it "interesting". In fact- Darius Roy connected on an bittersweet NBA-range 3 pointer as the final buzzer sounded.

But we could not match the Colonials. It was too little, too late and your Panthers fell to George Washington, 66-63. The rebound battle was even which was good to see, but oddly our leading rebounder was Darius Roy (14pts, 6rbs, 3ast). Josh Thomas (11pts, 3rbs) and Amir Allen (10pts, 4rbs) also scored in double figures for Milwaukee.

The bright side? We lost by just 3 points; and outside of the final 3 minutes this performance was one of the biggest duds of season. If we can still stay in the game on bad days, we can be successful. Unfortunately, the bad days have been almost as numerous as the good ones so far this season...

We all should be looking forward to this team putting together a full 40 minutes of solid basketball because we definitely have not seen it yet. This team is incredibly talented and we are just seeing glimpses of what they are capable of.

Here is to putting this one in the rear-view and focusing on the next big challenge- Tuesday, December 3rd at Drake.