With another W, Milwaukee is now 1 game closer to 20 games...

Your Milwaukee Panthers (5-2, 0-0) managed to eek out another W today in the 2019 Bahamas Showcase Tourney.

The Morgan State Bears played Milwaukee toe-to-toe for much of the game. Both the Panthers and Bears had a terrible shooting day (37% and 34% from the field, respectively) and the 2 teams combined for over 30 turnovers. Most of the choppy game was played from the foul line. It was not pretty. But as someone said about this game and our year so far in general, ugly progress is still progress, no? But for a couple brief Morgan State leads in the 2nd half Milwaukee commanded a small 2-4pt lead all game largely on the back of Te'Jon Lucas (26pts, 7rbs) who scored 42% of our points today. 👀DeAndre Abram added 14pts on 3-4 from 3pt, but Amir Allen and CJ Wilbourn were non-existent due to foul trouble and... I don't know.

What is becoming painfully apparent is our lack of a controlled post presence. In my opinion, Amir Allen is seriously good with potential to be AntHill-like good. Wil Sessoms and Harrison Henderson don't play much and when they do they haven't taken over the block (yet) like many of us hoped.

DeAndre Abram doesn't really play in the post, which maybe is the plan but he's too tall- we need those rebounds and second chances. CJ Wilbourn (only a freshman mind you) has not struck fear in the hearts of opponents yet either, and that's a concern. I know all those guys are better; they just have to assert it and put their stamp on this season's post card and things will get exponentially better for the team. 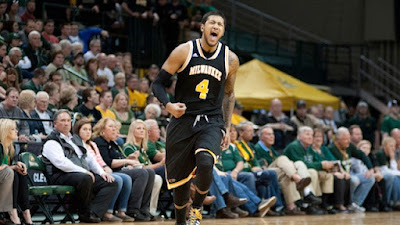 None of that sounds as bad as it is when we win, but if we can't improve the game in the paint... losses will pile up. Our deep bench and phenomenal back court aren't enough. All the bigs need to step it up and follow the lead of Amir Allen, and Amir Allen needs to make Amir Allen a household name in the Horizon.

We have a special team that really can shape their destiny and make a legitimate run at a postseason tournament if things continue to trend positive. And seeing as how both of our losses were absolutely winnable even in the closing seconds- the wins show no signs of slowing up.

Milwaukee will face George Washington tomorrow at 1pm to close out their appearance in the Bahamas Showcase and hopefully snag a 5th place finish.