Panthers run past the Roos of Kansas City, 61-52

A familiar face was on the visitor's bench tonight in downtown Milwaukee. Billy Donlon who coached our Horizon foe Wright State from 2006-2016 consistently bringing fielding compeitive Raider teams that made the Panthers (3-1, 0-0) fight hard for every victory we got during that time. Interestingly, Donlon was let go from WSU in 2016 after a 22–13 season. Not exactly a "sure-fire" dismissal but I guess....- I digress.

Though tonight kicked off a little disconnected your Milwaukee Panthers continued to connect enough (44% shooting on the night) to secure victory and move to 3-1 in this early season.

After the Panthers ran out to an early 6pt lead, the Kansas City Roos tied it up 16-16 after a Milwaukee turnover. Then we turned into an turnover machine it got ugly for a minute or five.. 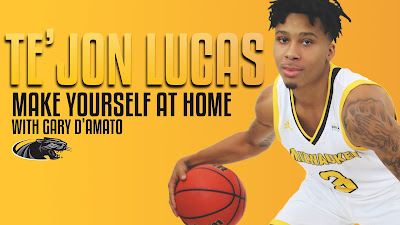 Fortunately the Kangaroos were not able to capitalize on all of these muffs and the score at the break was 26-22 after a Josh Thomas triple.

And a break was sorely needed for both teams. One big stat at half- Te'Jon the Facilitator already had 6 assists (he ended the game with 10).

As the 2nd half wore on, TJ asserted himself head and shoulders above the defense and began to take over the game with some inexplicable makes through traffic. 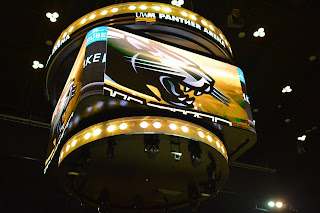 The Panthers regained- then relinquished- then regained momentum again leaving the game at 58-46 Milwaukee with 3:36 left. Milwaukee was able to control the game enough with a 10pt buffer making enough free throws to put the game out of reach at 61-52 and close it out with another W.

After the long, hard-fought Western Michigan battle and this victory tonight, our main (DI) competition is starting to feel the fury of this new Baldwin-era Panther arsenal.


Four Panthers scored in double figures tonight: Josh Thomas (16pts, 6rbs), Te'Jon Lucas (15pts, 10ast, 7rbs), Will Sessoms (12pts, 6rbs) and Darius Roy (12pts, 3rbs). Roy and Lucas have been talked about lots. Sessoms and Thomas have been flying under the radar a bit but if you've been following at home you know they are key pieces of what will determine this Panther team's ultimate fortunes.

We played a decent game for the most part and while the Roos are not the Badgers, it is an encouraging start of what will hopefully become a bit of a streak (Kansas be damned) and a trend of winning and securing leads that permeates the 2019-2020 Panther season.