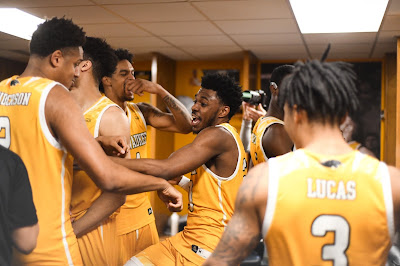 You can't keep a good squad down

Te'Jon Lucas' (20pts, 7ast, 3rbs) 7 assists were all he had going until he went ballistic at the end of this slow but entertaining contest. Your Milwaukee Panthers (9-10, 4-3) had just enough to grab this W.

Courtney Brown Jr. (12pts, 4rbs) and Darius Roy (11pts, 2ast) lead the shooting offensive attack early but we kept committing 1st half turnovers and we weren't exactly lighting up the net in the 1st Half. It didn't start out good.

Oakland's Xavier Hill-Mais was a pure wrecking ball down low. It is fortunate that he isn't as tall or as quick as some other talented forwards his size otherwise he alone may have taken us out.

The officials in their best imitation of the Seven Dwarves decided to whistle while they worked tonight. And so accordingly, your Milwaukee Panthers were racking up fouls like Lower East Side parking tickets and that allowed Oakland to cut the deficit to just 2pts just before half. 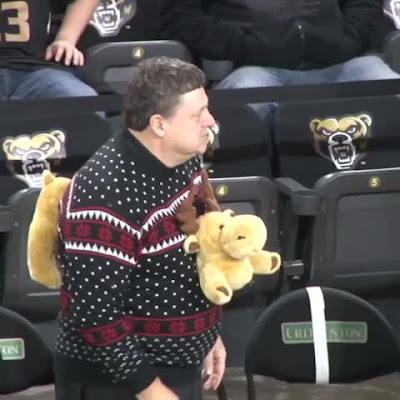 Greg Kampe is one of the longest tenure Mid-Major coaches; he is a riot and a good guy, but had to lose tonight!


So the 1st half was a slow paced tempo and resulted in a Milwaukee buffer of 4-6 pts and we entered half leading the Grizzlies, 35-31.

In the 2nd Half, Hill-Mais (aka TankMan) proceeded to And1 to clip our lead to a single point, but like clockwork, we bounced right back with a bucket.

In the final minutes...

A crucial defensive stop to a Te'Jon Lucas acrobat parkour H-O-R-S-E hoop put us back up by 5 with 3:40 left.

Could we hold the lead?

More whistles against Gold; less lead for Gold. but JT stepped up when we need it and- hoop! But Oakland went right back to their postmen and it was within a basket once more...

Te'Jon took it to the hoop knowing Oakland was in bonus and added to the lead. Would shaving off more time have been more effective? I don't think so. The more the game seems out of hand, the less of a chance the opponent truly believes they have.

But within seconds, Hill-Mais was fed like a hungry hoop monster in the post, scored and cut it to 70-68.

Milwaukee fouled on purpose to thwart an Oakland 3pt buzzer win attempt and both free shots fortuitously bounced out. Amir Allen was on it asap, grabbed the rebound, called timeout, and...... that was it.. 73-68, Milwaukee victory.

This team keeps fighting.. 20 wins is still within sight. We still have the postseason...


All in all a mediocre effort until the end when Te'Jon Lucas went nuts. But we are back on the winning track. We aim to continue that in Youngstown, OH against the Penguins next week Thursday at 6pm.

Tune in- these Panthers have already exceeded most low expectations. Nowhere to go but up from here and prep for a big HLT run...