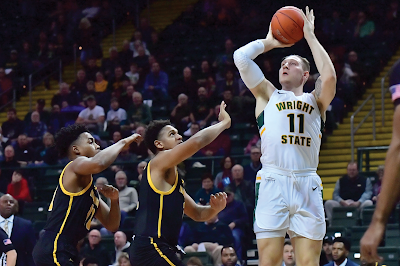 L.L. Cool Bean in rare form; we gotta be better

Somehow we are still in 6th place and only a game or so out of 3rd place. We do not play the undisputed 2 best teams again until potentially in the league tournament in March. We could still finish 12-6 if we sweep, hey! 😃

That is the "good" news.

In a conference that falls in the bottom 1/3rd in both NET and RPI we could probably still get 4th place with a losing record. And a losing record is not something to be proud of. We aim to win every single game and we have not been winning a bunch lately.

That is the reality.

Friday night was an entertaining game against Wright State- in the 2nd Half at least. Both team's couldn't hit a shot in the first half and we entered the break with Milwaukee having scored all of 19pts. It was 26-19, and Wright State had the lead in a game that seemed like it would be a 20pt blowout. But fortunately for us, they did not take advantage of our sluggish start like many other teams have and made a lot of mistakes of their own.

The Panthers awoke in the 2nd Half and fans. There were actually a good smattering of Panther fans there; it is a shame we can't win and multiply the number of sports fans and Panther alum, etc. looking for something fun and cheap to downtown. The Bucks and Marquette aren't the only game in town and those events are will cost quite a few bucks more..

Te'Jon Lucas (18pts, 6rbs, 4ast) led the brunt of the Panther surge but in the end it wasn't enough and Wright State closed it out on fouls. They shot 26 free throws... we shot 10; this stat points to our lack of a post presence that might draw fouls and free shots. Maybe next season. Maybe yet this season our postmen will step up big.

But late in the game as Milwaukee began to cut into WSU's 12-18pt lead, one of the league's best players Louden Love (aka "L.L. Cool Bean") was tossed from the game for a flagrant 1 foul!

We played them tough but they showed us who was the better of the two team's and closed out the game in typical '19-'20 season fashion (we trail all game, then get a late spark!! ....get within 3-5pts.. (...get everyone's hopes up lol) we make some mistakes... other team doesn't and wins). 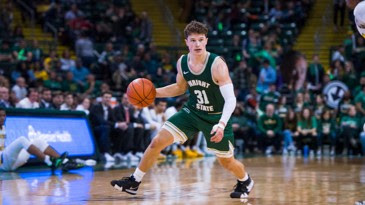 A hooper Frodo warned us in a not-so-subtle way, of our impending visit to his uncle Bilbo's house in Chicago this Thursday night

Against Northern Kentucky we had a season-low 16pts at half and didn't get much closer than 10pts until the end (sound familiar?). I can't bring myself to describe much more as I was taught by the movie "Bambi" that, "if you don't have anything nice to say". I will say this for the eternal Milwaukee Panther record: NKU waxed us on our home court and it wasn't even even close- the end.

Where has Darius Roy's shooting and Amir Allen gone? Was Arturro Bingham's emergence just a flash in the pan? If a walk-on is more effective than alternative bench options- why doesn't he get more minutes? Not making mistakes is a very underrated sports (and Life) skill. I say this with all due respect to everyone making mistakes; I have made more mistakes than they will ever make- combined. No BS.

More dispiriting- what in the heck is up with our slow starts and steady drop in 3pt shooting %? Those shot have to fall at some point, no? Statistics would say at some point we are going to have some record high 3pt shooting nights before this is over; but sometimes... you truly are just an outlier (it really has simply just gotten very bad and is not gonna get better before season's end).

We are all just tired of losing. I'm sure nobody is more sick and tired of it that the team and coaches.

We have taken a couple steps back, but there are plenty of opportunities to turn this around before Horizon League Tourney time...

It has been tough, let's not BS; we have hit another skid. Despite playing competitive against the League-leader on Friday night, we laid an egg on Super Bowl Sunday against NKU that has left a bad feeling in everyone's stomach. Let's erase that feeling Thursday and try to actually "march" into March successfully. We need to do whatever is necessary to play consistently well by the time the HLT starts.

Back on the road again.. next game is this Thursday at UIC in Chicago, IL. It will be on ESPN+ and is only an 80 minute drive down I-94E if you are feeling froggy. Let's turn these tables and start a winning streak.